How journalist Mikey Kay captured stories from the front lines of the healthcare industry during the pandemic and saw a side of the U.S. few others ever will.

In early 2020, as America was locking down, COVID was spreading and vaccines were a distant hope, a Welsh man embarked on a cross-country road trip. Journalist and documentary filmmaker Mikey Kay spent six weeks in a rented motor home, interviewing dozens of scientists, doctors, engineers and factory workers across America, and around the world on Zoom, to document in real time how medicine and technology were innovating to stave off disaster.

Kay’s adventures included freezing temperatures, torrential rainstorms, marathons of loneliness, and driving, living and working out of an RV. But he also got a chance to meet a cross section of American workers, all of them energized by the challenges of confronting COVID while personally grappling with the fear and uncertainty of the time.

Kay and his motor home cruised by GE Healthcare plants scaling up to produce more ventilators, X-ray machines and other lifesaving equipment suddenly in short supply everywhere in the world, as well as hospitals, Ford Motor plants and field hospitals. With a team providing remote support, he eventually created 42 short videos for GE Healthcare in about the same number of days, documenting how the company started by Thomas Edison in 1892 was responding to a 21st-century pandemic.

On the front lines

Kay isn’t a stranger to tense situations or rough terrain. An assault and casualty evacuation helicopter pilot for two decades who was deployed to Iraq and Afghanistan, he’s filmed news and documentaries around the world. But it was a personal story that caught the eye of the team at GE Healthcare. In 2019 Kay produced a film about his severely autistic brother Spencer, as a tribute to his late mother’s care and devotion, that appeared on BBC One.

Soon the independent filmmaker was on a plane to the States, having agreed to produce a series of videos about GE Healthcare that would become On the Frontlines, now beyond its fourth season. It was March of 2020, and the news was full of reports about a strange virus spreading around the world. By the time Kay landed, the U.S. was hours away from shutting its borders. He soon realized his plans — sleeping in hotels, filming up close with his subjects — were out the window.

A team of collaborators at GE Healthcare, led by storytellers Kristin Fallon and Amanda Gintoft, formed a sort of war room, both to help line up interview subjects for Kay and to help him navigate the rapidly changing landscape of COVID safety rules and cut through any red tape to get him access to GE Healthcare facilities.

“Kristin and I had these wonderful conversations about searching for the way that we make this interactive,” says Kay of those first few days figuring out how to complete the project despite the pandemic. “Kristin had the brilliant idea to turn GE Healthcare social media channels into a news channel. And that meant very interesting human stories at volume. And that meant working around the clock, to try and harvest the stories, film the stories, edit these stories and then react to these stories.”

So Kay and his support team improvised. At a motor home dealership outside Madison, Wisconsin, he was introduced to the ride that would take him through a large swath of the U.S. “I’m fairly used to quite busy cockpits, but I had no idea just how busy RVs were,” says Kay, who piloted assault choppers. A young employee showed him the ins and outs for two and a half hours. “The conversation, in essence, was along the lines of: If you do this while this is running, it’s going to blow up.”

Kay named the motor home Matilda, after a buddy’s daughter, and hit the road. His first stop was a GE Healthcare plant in Madison where employees were working tirelessly to solve a tough problem: how to ramp up the production of critical but complex ventilators. That night he plugged Matilda into an outlet outside the factory, cranked up the heat and spent his first of many nights on the road. 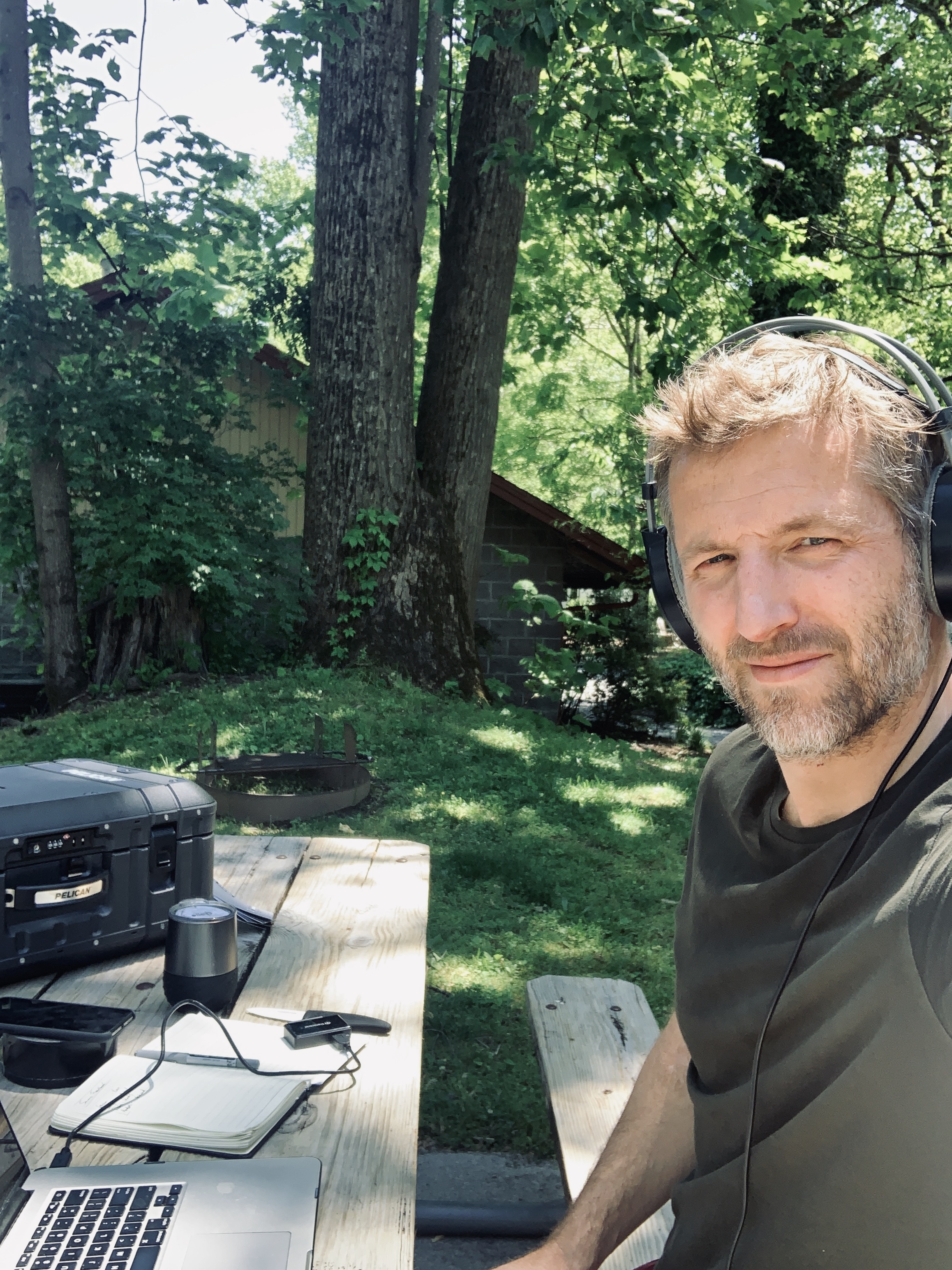 Wending his way across the country

As he made his way west to Waukesha, where he talked to GE Healthcare workers making X-ray and computed tomography (CT) machines, also crucial to supporting the diagnosing and treating of COVID, he learned Matilda’s quirks and nuances. Cranking up the heat to sleep meant he’d run out of gas pretty quickly and spend his third night awake, flashing back to how he’d survived cold-weather military training in Norway. Road-trip basics aside, Kay had an even bigger problem on his hands with his work. As the pandemic gripped the world, the factories and offices Kay was touring were trying to adapt to safety protocols that were changing by the day as new information and safety protocols became available.

“Do I film with the mask but have the mask down when I’m talking to the camera?” Kay remembers asking himself. After many conversations with his support team, who were also in close contact with the health and safety professionals, he and Fallon eventually settled on a jury-rigged setup in which he both wore and held cameras, and interviewed GE Healthcare employees while walking several feet in front of them. All while continuing to adapt to and navigate the nuanced safety protocols.

As the weeks wore on and Kay traveled south through Indiana, Michigan, Tennessee, Georgia and finally Florida, he realized that despite doing interviews daily, he was lonely. He was essentially living in a cramped space, often working until the early hours editing footage and conducting video interviews with medical experts and business leaders across the globe. He admits to talking to Matilda like Tom Hanks’s character did to a volleyball in the film Castaway. At night, he’d spend time chatting with Fallon, Gintoft and the team at GE Healthcare to keep his spirits up.

“I’m quite a jovial guy, I love meeting people,” Kay says. “I’m quite tactile as well. I love the handshake. I love to hug. You can’t do any of that [during COVID].”

He found relief chatting with strangers when he’d pull over for gas or food, noting that Americans are always curious to meet a Brit with a camera. But mostly, he recalls, the roads were empty. “America was a very desolate place,” he says of those weeks. Until he got down south, where the mood was markedly different. “Different states and areas seemed to be adapting to COVID at different rates,” comments Kay. In Florida the beaches were packed, and as he passed through Atlanta, he was happy to share a meal of barbecue while interviewing a GE Healthcare sales leader. Following the latest CDC social distancing guidelines, the two men ate their food on either side of Matilda’s hood. It was the first time Kay had shared conversation over a meal in more than a month.

From Sunshine State to stormy skies

Still, Florida had other surprises in store. A police officer in Kissimmee warned him that he was camping in a bad part of town, but Kay, the tough yet gentle military man, shrugged it off. Sure enough, that night he was awakened by the familiar sound of rifle fire nearby, followed by a police helicopter. He decided to relocate to an RV park in Clearwater. There his reporting wrapped up, and with no flights to get on and no one able to return Matilda to Wisconsin, Kay began the long drive north again. But he wasn’t out of the woods. Torrential rainstorms hit his route home, and after a long day of driving, the following morning, just hours from his destination, a bleary-eyed Kay made a wrong turn in a downpour and nearly sank Matilda in a swollen river.

Perhaps the most startling experience of all was the quietest. About halfway through his travels, Kay stopped in Chicago and was shocked to see the normally bustling Windy City deserted: no cars, no people. After filming all day in Chicago, Kay had a 5-hour drive to his next stop, in St. Joseph, Michigan. That night Fallon rang him up at 1:30 a.m. just to check on him, knowing he was exhausted from driving and being isolated.

”She just said, ‘You know, you’ve gone and documented this period in time, this moment in time, that the world is very unlikely to ever see again,’” recalls Kay with appreciation. ”And so the team were just there with me 24/7.”

Meanwhile, GE workers were telling him that they’d gather at lunch to watch the latest episode he’d filmed, eager to learn how their far-flung colleagues were coping with COVID and what they were working on. Kay says he felt like he was the one who should be grateful. After all, most of the people he’d interviewed at GE were folks struggling with the pandemic like anyone else but finding ways to get back to their essential work. “You have to remember, it was still the early days: COVID daily cases and deaths still hadn’t got anywhere near their pandemic highs, and vaccines were not even a conversation at this point.”

“If it wasn’t for those people who accepted me into their lives, these [videos] would never have happened,” he says, summing up how he felt at the end of the trip. “But I also like to think that it was an outlet for them as well, to get what they were thinking and feeling off their chest, and to tell their stories. It resonated, and it formed this real positive sort of energy around GE Healthcare, around this response to the early days of the pandemic. It made it all worthwhile.”

Please enjoy this video of Mikey Kay’s tour 2020: At Work Against COVID-19.