Ever since the first cases of COVID-19 struck, hospitals around the world have been racing to get a step ahead of the virus. They’ve become adept at sourcing and stockpiling personal protective equipment, establishing vigorous new cleaning protocols, and acquiring thousands of new ventilators. But the focus on fighting the pandemic and wanting to keep the number of people in hospitals down to lower the chance of transmission also means that standard procedures like magnetic resonance imaging (MRI) have been postponed. The demand for these imaging exams, however, hasn’t disappeared.

According to Frost & Sullivan data, COVID-19 contributed to a 35.5 percent drop in MRI procedure volume in 2020. While scans were back up in 2021, it has not yet reached pre-COVID numbers. Tackling this backlog is going to require major efforts on the part of radiologists and technologists across the nation to process and review images, manage scan times and disinfect MRI equipment between patients.  This is at a time when departments are also facing these challenges as they attempt to battle industry-wide staff shortages and burnout.

One way to ease the problem involves technology; specifically, using artificial intelligence to increase the clarity of images while cutting down on scan time. “There’s always a trade-off in MRI,” says Darryl Sneag, director of peripheral nerve MRI at the Hospital for Special Surgery in New York. That trade-off is usually between the signal to noise ratio (SNR), scan time and spatial resolution.

Sneag and his team have been using new software developed by GE Healthcare that helps him eliminate some of the trade-offs.

The application, AIR Recon DL, developed on GE’s Edison software platform was launched in 2020 and to date, has benefitted more than two million patients around the world. It uses a deep learning algorithm to improve MR image reconstruction. For radiologists, this translates as sharper images in a shorter amount of time. And the quicker doctors can come up with diagnoses, the faster patients can start treatment. “What AIR Recon DL has allowed us to do is image faster, even with a higher spatial resolution, and achieve equal-to-better image quality,” Sneag says. “At the end of the day, it’s helping us to potentially make alternative diagnoses or see anatomical structures much sharper and finer than we might have previously been able to.” 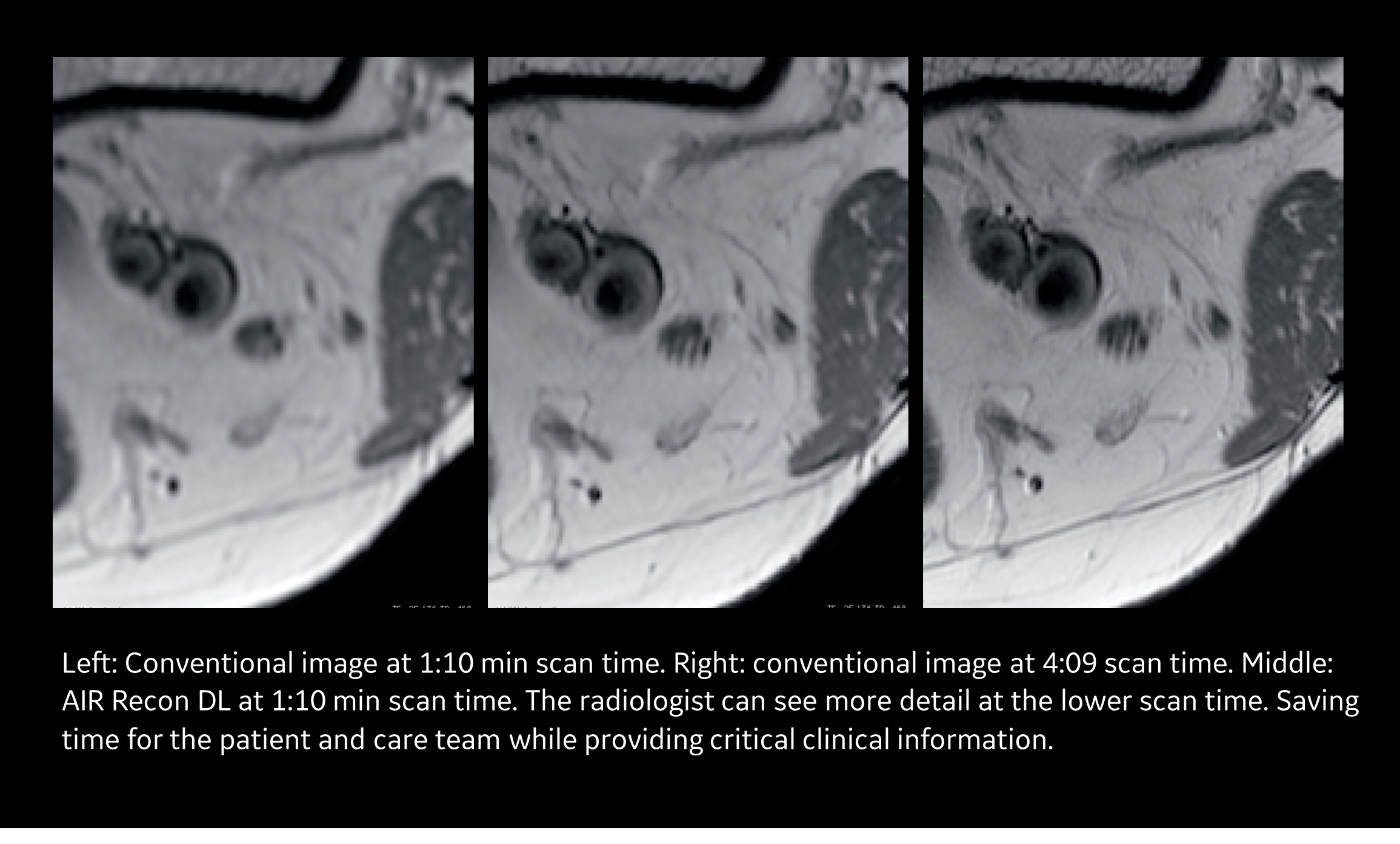 MRI scanners utilize powerful magnets — hidden inside the large cylinder surrounding the patient — to excite hydrogen atoms (protons) in the body. Those hydrogen protons then emit radio signals, which are detected by the scanner and transformed into a digital image. But those radio signals compete with other radio waves generated by the MRI apparatus and the human body itself — a kind of ambient electrical noise. To get a sharp, high-quality image, radiologists need to achieve a higher signal-to-noise ratio (SNR).

In the past, patients would have to endure longer sessions in the MRI system for the radiologist to acquire higher SNR or spatial resolution in the final image. While shorter scans might send patients on their way faster, they could compromise image quality and, ultimately, diagnostic confidence.

This is where the AIR Recon DL’s algorithm comes in: it “de-noises” the raw digital data acquired during the scan and delivers a clearer signal to the image reconstruction process. Reducing the noise enables the MRI to produce higher quality images and up to a 50 percent reduction in exam times for a more comfortable patient experience1. These advancements are particularly beneficial for patients who have trouble holding still during scans, such as pediatric, neurodegenerative and geriatric patients.

AIR Recon DL works in concert with another GE component: AIR Coil. These are flexible, lightweight, blanket-like coils that radiologists place on top of the patient’s body or wrapped around the patient’s arms and legs, for example. They pick up the signals that the body emits after being activated by the magnet in the MRI.

Sneag described how he was putting the app and the coil to use in a case he was working on: A young woman had fallen on broken glass, causing lacerations up and down one of her arms, and her surgeon requested an MRI to map the nerves prior to surgery. “We’re able to cover an entire arm in one shot through this AIR Coil technology,” Sneag says. “It’s enabling us to image a much larger region of anatomy within a much shorter period of time, while still maintaining the same image quality.”

With patient exams requiring MRIs waiting out there to be scanned and read, AIR Recon DL is in action at just the right time. “You can only push the physics so far, or the limitations of the magnet so far,” Sneag says. “I think we’re just scratching the surface with respect to AIR Recon DL’s capabilities.”