If you have been diagnosed with cancer, you have probably received at least one CT scan, before or during the course of your treatment, and possibly many more. 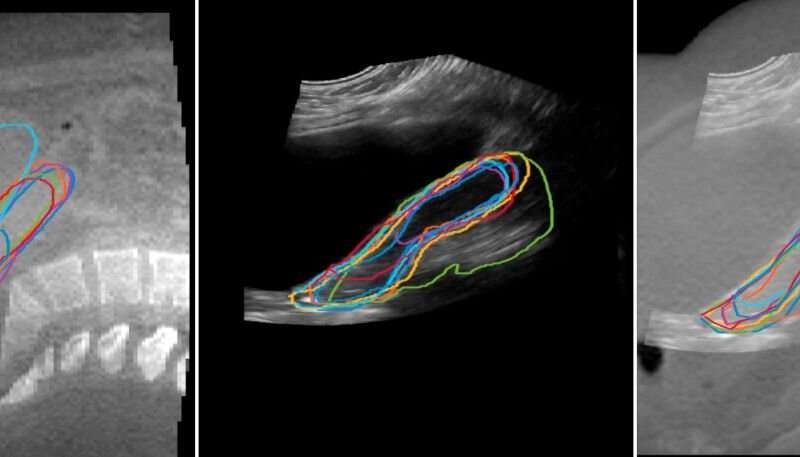 Three images of a cervical cancer patient's abdomen, taken using cone-beam CT scans and ultrasound, then combined to help plan radiotherapy. The colored contours, which represent the radiotherapy planning volumes produced by the researchers, are much more closely aligned on the combined cone-beam CT/US image. Credit: Institute of Cancer Research

CT scans are regularly used to plan radiotherapy, so they play an important role in cancer treatment. Doctors use CT scans to decide how much tissue will be exposed to radiation in order to treat tumors. A treatment plan is made, which includes margins around the tumor, to ensure the whole tumor is treated.

These planning margins inevitably expose healthy tissue to damaging radiation that can lead to side-effects after treatment, but by combining CT scans with other types of imaging, more precise treatment could potentially be delivered.

Researchers from The Institute of Cancer Research have tested two imaging techniques that combine CT with other types of imaging in parts of the body where delivering precision radiotherapy is a challenge. This could help to improve radiotherapy planning compared with using standard CT scans on their own.

Ultrasound and CT for cervical cancer

A group of researchers led by Dr. Emma Harris and Dr. Susan Lalondrelle at the ICR and The Royal Marsden NHS Foundation Trust have looked at whether pairing CT scans with ultrasound images could produce more detailed images for planning cervical cancer treatment.

Treatment plans for women with cervical cancer, which include the uterus and cervix, may often include quite large margins around the tumor, because the natural movements of the bladder and the bowel can cause tumors to shift quite significantly.

These margins mean women can have unwanted side-effects from radiotherapy, and there is even a risk they may not be able to complete their treatment.

Ultrasound is a quick and effective way to produce high-quality images of women undergoing treatment, and the study showed that combining ultrasound images with cone beam CT scans produced more detailed images than either scan alone. Cone beam CT scans are a special type of CT that can be acquired during treatment and then used to plan radiotherapy to suit the patient's anatomy each day.

The researchers took ultrasound and cone-beam CT scans of 11 women with cervical cancer and they found that when the two types of images were combined, they could use them to better outline the positions of the uterus.

In fact, they found that the details picked up by the two techniques actually complimented each other, so regions that might not be visible on CT were often clear on Ultrasound and vice-versa, allowing doctors to improve the precision of radiotherapy planning. 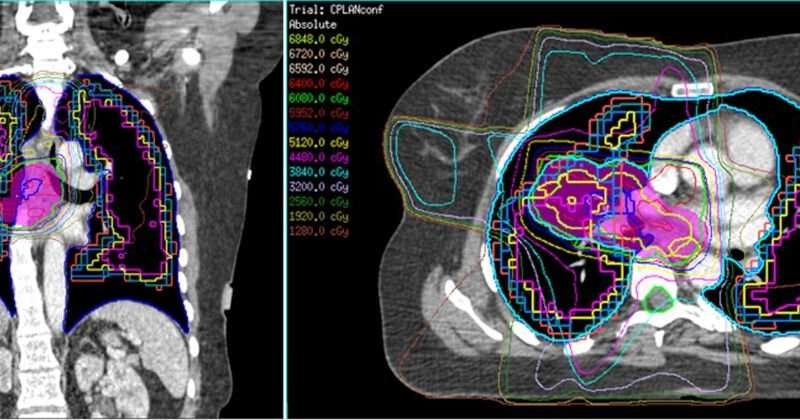 An image of the lungs of a cancer patient combining SPECT imaging and CT scans to help doctors assess the distribution of radiation from radiotherapy. Credit: Institute of Cancer Research

Not only is Ultrasound relatively cheap to perform, it is also quick and easy to incorporate into current radiotherapy practice, so it could be used to adapt radiotherapy during treatment.

This could mean reducing the amount of healthy tissue exposed over the course of treatment, helping to reduce potential side-effects for women with cervical cancer.

Lung cancer is another disease where side-effects from radiotherapy can be severely debilitating, and a study led by Professor Nandita de Souza and Dr. Marina Ahmed at the ICR and The Royal Marsden have tested a type of nuclear medicine scan called SPECT to determine the effect of radiation doses on lung tissue.

SPECT is similar in a way to CT scanning, but instead of creating cross-sectional images from X-rays that have been passed through the body, it produces images from radiation that has been injected into the body. SPECT scans can be used alongside traditional CT scans to help doctors plan radiotherapy.

A radioactive tracer compound circulates around the body and its location is imaged with computerised 3-D processing. Using a particular tracer means that certain body functions such as blood flow to tissues and organs can be imaged.

Patients with lung cancer may have trouble breathing, and the effect of radiotherapy on the lungs can make this worse. Doctors must therefore make a trade-off between delivering a radiation dose that can kill tumour cells against the increasing chances of serious side-effects such as disabling breathlessness.

For lung cancer patients who are treated with radiotherapy, it is important to limit radiation damage to normal regions of lung. Preserving lung function is important to avoid side-effects such as breathlessness and help patients maintain a good quality of life.

The researchers scanned 48 patients with lung cancer using SPECT to identify the regions of functioning lung, and showed that it was possible to predict whether a patient's lung function would deteriorate after radiotherapy based on how much lung tissue received radiation, even at low dose.

The findings mean that for lung cancer patients whose breathing is already limited before radiotherapy, using SPECT scans which measure blood flow alongside standard CT scans may be helpful.

Results of the SPECT scans could be used to amend treatment plans to limit normal regions of the lung with good blood flow receiving low doses of radiation, hopefully avoiding harmful side-effects after treatment.

CT scans remain an important tool to help diagnose and treat cancer, and our researchers are showing how they can be used in novel ways combined with other types of imaging to keep benefitting patients.