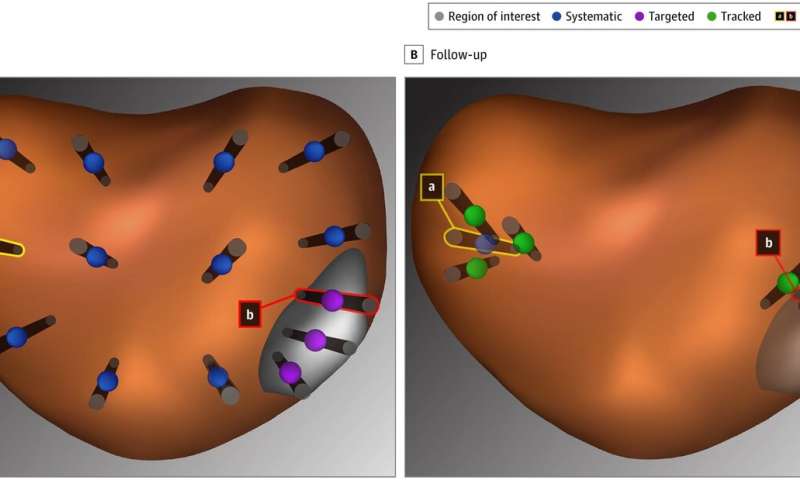 Systematic, Targeted, and Tracked Prostate Biopsy Schematic: Biopsy approaches shown on reconstructed images from magnetic resonance imaging–ultrasonography fusion device. A, Region of interest with 3 targeted biopsy cores, 1 containing cancer tissue (b). Systematic biopsy with 1 biopsy core containing cancer tissue (a). B, Follow-up with tracked biopsy cores from the cancerous site within (b) and distant from (a) the region of interest. Tracked biopsies were placed to circumscribe a previously abnormal site. JAMA Netw Open. 2019;2(9):e1911019. doi:10.1001/jamanetworkopen.2019.11019

Every year, tens thousands of men in the United States are diagnosed with low-risk prostate cancer. Most are told that they don't need treatment other than "active surveillance" to monitor their slow-growing tumors. Now, UCLA physicians have shown that the best way to proceed with this is by starting out with an MRI-guided prostate biopsy.

In the past, doctors relied on ultrasound to guide a biopsy needle into the prostate. However, ultrasound doesn't allow the visualization of prostate tumors, so a biopsy may have missed a tumor. Over the past decade, it's become possible to instead perform an MRI-guided biopsy. MRI, or magnetic resonance imaging, lets doctors see the majority of prostate tumors and take a biopsy from the exact location of the cancer within the prostate.

"We've found that when you use an MRI-guided biopsy to confirm what appears to be a low-risk prostate cancer, you can then tell the patient with pretty good accuracy what the future is going to entail and what his risks are of having a cancer that will require treatment in the future," said Dr. Leonard Marks, senior author of the paper published in JAMA.

Prostate cancer is typically detected with a blood test measuring levels of prostate-specific antigen, or PSA. However, elevated PSA levels detect not only aggressive prostate tumors, but also very slow-growing cancers that are unlikely to become life-threatening. Men with higher than usual PSA levels are referred to get a biopsy, in which cells are collected from the prostate to reveal more details about a tumor.

"If you know exactly where to put the biopsy needle, you have a much better chance of getting answers about a tumor," said Marks, who holds the Jean B. deKernion Chair in the department of urology at the David Geffen School of Medicine at UCLA. Earlier this year, his group reported that combining MRI-guided biopsies with a more traditional approach of sampling throughout the prostate detects more cancers than either approach alone. However, he said, questions have lingered about the clinical benefit of MRI-guided biopsies and exactly when they should be used in the monitoring process.

From 2009 to 2018, 606 men with prostate cancers of apparent low risk were enrolled in the UCLA active surveillance program. For the new study, researchers analyzed data on 332 of those men, all of whom received an initial MRI-guided biopsy and at least one follow-up biopsy an average of 3.9 years later.

The researchers found that when a man's prostate tumor had a Gleason Score of 7 at the time of an MRI-guided biopsy, there was a three-and-a-half-times greater risk that the man would develop a higher-risk cancer compared to men who had a negative biopsy. (The Gleason Score is a grading system used to determine the aggressiveness of prostate cancer.) A score of 6 is generally considered low-risk cancer recommended for active surveillance, while a score of 7 or more may require radiation or surgery.

Moreover, combining an MRI-guided biopsy with the more standard approach of taking a systematic sampling of biopsies from around the prostate boosted the likelihood that a positive initial biopsy result was truly positive.

In the study, the risk of later developing a high-grade prostate cancer was less than 8 percent for men whose biopsies were negative, 11 percent if the biopsy revealed a Gleason Score of 6, and 23 percent with a score of 7.

"While MRI-guided biopsy is being used," Marks said, "it is still not being very widely used and our results have the potential to establish a new standard for using it in active surveillance."

MRI-guided biopsy can be used to determine which men should receive more frequent follow-up biopsies or even active intervention before a higher-grade tumor develops, Marks said.

The study also integrated the use of tracked biopsies—in which technology lets physicians take a follow-up biopsy from the same location as a previous biopsy to determine how a cancer is changing. Marks' team found that the tracked biopsy detected more upward changes in the grading of cancers—from a low-grade to high-grade tumor—than non-tracked biopsies. However, more work is needed to study the value of tracked biopsies.

"All these new technologies are advancing the field and serving patients better," Marks said.