How a surgeon cured a young girl’s “incurable” brain aneurysm

Jessica, her mom and the medical team who helped save her life.

When 15-year-old Jessica Vargas from Cali, Colombia, started getting headaches two years ago, a brain scan told her family something they never wanted or expected to hear: Jessica had a large, complicated congenital aneurysm – a bulging blood vessel in her brain – on an artery that’s difficult to access and impossible to treat.

Traditional invasive surgery would almost certainly be fatal, but not treating the aneurysm would be nearly as risky.

The aneurysm could burst at any moment, leaving Jessica dead, blind or without the ability to taste or walk. Jessica was young and otherwise healthy, so doctors decided not to operate, monitoring it closely and hoping it would improve on its own.

There are almost 500,000 deaths each year caused by brain aneurysms globally. Half of the victims are younger than 50. Ruptured brain aneurysms are fatal in about 40% of cases, but of those who survive, about 66% suffer some permanent neurological deficit.

As they monitored the aneurysm, Jessica’s symptoms became more severe. She had difficulty swallowing and found it challenging to eat as she would consistently drop her silverware. “I couldn’t hold things, and I felt I couldn’t swallow well,” Jessica says. “I realized something was wrong with me.”

When she had trouble walking, her family rushed her to the ER where a neurologist told Katherine Vargas, Jessica’s mom, there was nothing they could do.

“The doctor bent her head, looked at me and said, ‘The girl will lose her sight, her mobility and she will become bedridden until the mass bursts, since it is unavoidable’,” says Katherine.

The only alternative was a high-risk surgery. That’s when the medical team contacted Dr. Jorge Holguin, an Interventional Radiologist at Clínica Nuestra, a healthcare partner of Corazón y Aorta in Cali, Colombia.

Corazón y Aorta specializes in cardiovascular surgery. They recently acquired an OEC 9900 mobile C-arm from GE Healthcare to perform diagnostic and interventional applications. Dr. Holguin knew he had the expertise and the tools to perform the surgery that could save Jessica’s life. 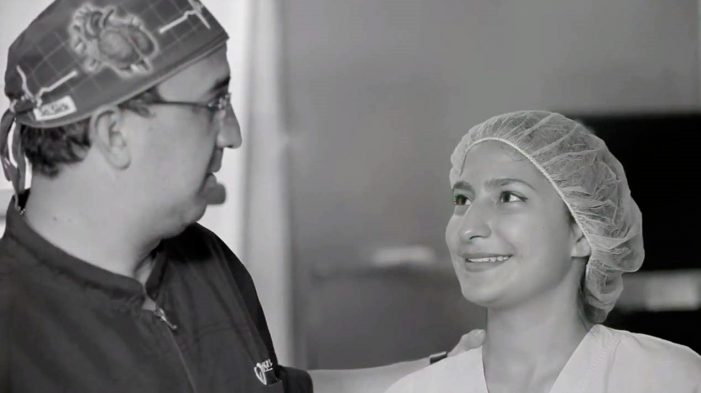 “The equipment is enough to perform endovascular treatment and treat Jessica’s congenital disease, which otherwise wouldn’t have a good outcome,” says Dr. Luis Felipe Medina, head of the surgical team and scientific director at Corazón y Aorta in Colombia.

The OEC 9900 has special software to amplify images of the aneurysm so doctors can use a catheter to prevent the aneurysm from bursting, a minimally invasive surgery with high success rates.

The procedure involves placing a catheter through the groin into the artery containing the aneurysm. Platinum coils are released, which causes the aneurysm to clot, preventing more blood from filling the aneurysm. The equipment also ensures minimum radiation dose, a key consideration for a smaller, younger patient like Jessica.

“The doctors were very realistic,” Katherine says. “They told me it was a hard procedure but they were going to try, as Jessica was young and deserves to live.”

The surgery was a success. Jessica regained all of her senses, and it took her less than a month to walk again. Today, Jessica is fully healed and living without restrictions.

“Jessica’s story is a lucky one,” says Dr. Medina. “Any surgically invasive treatment was impossible for her.”

Dr. Medina continues to use the OEC 9800 and 9900 for several patients at Corazón y Aorta, including those with complex pathologies such as aneurysms and thoracic aorta dissections that need immediate attention. Seeing the success of these procedures, the medical board is providing similar equipment and services in facilities across Cali to complement cardiovascular surgery. Indeed, clinicians throughout Cali are performing new types of minimally invasive interventions, allowing patients to recover more quickly than ever before.

Jessica has also been inspired by her medical team. “I want to study neurology and be an example for those who have similar health issues,” she says. “Trust the doctors. They want to do what´s best for us, to help us and save lives.”