Bringing Life Changing Technologies to a Remote Hospital in Norway

Serving as a clinical center complete with a PET/MR and a PET/CT for central Norway, St. Olav’s Hospital is the main treatment center for a region with a growing population nearing one million. Patients receiving these combined PET scans also require an injected imaging agent, or a PET tracer, to visualize areas of interest in the body. Prior to June 2020, the hospital was dependent on shipments of PET tracers from Oslo to support their patients. Challenging transport conditions and availability of these drugs from a site more than 500 km away often impacted patients waiting for these treatment changing scans. “A close cooperation between St. Olav’s and GE Healthcare is essential for a complex project like this,” said Marianne Leirdal Stokkan, head of Nuclear Medicine and Medical Physics, St. Olav’s Hospital. 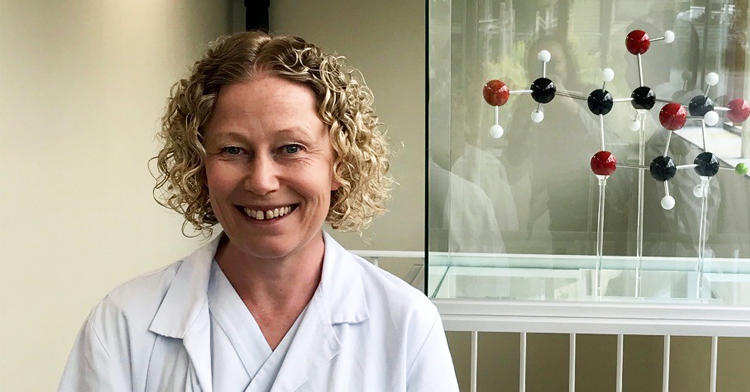 “We are very proud and happy about what we have built here, and we give so many patients in our region a better level of care because we can produce our own PET tracers.”
– Marianne Leirdal Stokkan, head of Nuclear Medicine and Medical Physics, St. Olav’s Hospital

“We needed a cyclotron center, a PET radiopharmacy. In addition to the direct need for our patients, we also have the Norwegian University of Science and Technology nearby. They have a large medical imaging research group, but no local supply to research isotopes and radiopharmaceuticals in our region,” says Marianne Leirdal Stokkan, who heads the Nuclear Medicine & Medical Physics department at the hospital.

St. Olav’s Hospital has been a recipient of a generous benefactor who has enabled the procurement of many advanced healthcare technologies, including the PET/MR and PET/CT systems. When the need to be self- sufficient in their PET imaging center became dire, once again, a donation was made to enable the addition of a cyclotron and PET radiopharmacy to Trondheim’s molecular imaging center. “That was the starting point for the journey we have been on since,” said Stokkan.

Concurrent to the timing of St. Olav’s entering the tendering process to secure a vendor to build their new PET radiopharmacy, the University Hospital in Tromsø, Norway was also beginning the same process. To leverage the expertise and efficiencies from both hospitals, Trondheim and Tromsø joined efforts to find the right partner. The chosen partner was GE Healthcare.

“The choice was not difficult. We had a good impression of GE Healthcare as a supplier. The two other existing cyclotrons in Norway were also delivered by GE Healthcare, so it felt like a confident choice,” says Leirdal Stokkan. 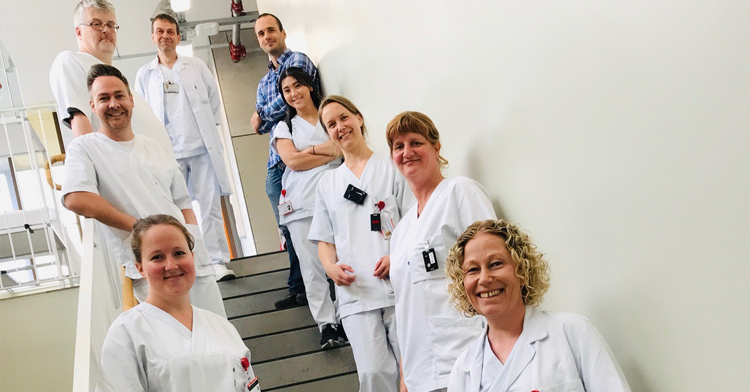 It only took St. Olav’s Hospital two and a half years to start producing their own PET radiopharmaceuticals, from the first brick in the foundation to the first patient dose.

The project leader from GE Healthcare was a key member of the team in setting up the project for building the PET radiopharmacy facility. For the team that was recruited to set up the PET radiopharmacy, it was crucial to gain as much experience as possible, in the shortest possible time. While GE Healthcare was responsible for the technical side of the installations, the construction was left to St. Olav Eiendom. The project managers from GE Healthcare, St. Olav’s Hospital, and Sykehusbygg HF on behalf of St. Olav Eiendom needed to work very closely together from the inception to completion of the new facility to ensure success.

“In the beginning, we traveled to different sites to learn. We visited the project in Tromsø and had discussions with them, we went to Uppsala where GE Healthcare has a major cyclotron site. It was all very useful,” says Leirdal Stokkan. As for the development of the center itself, the journey was just beginning.

“The whole time it has been very close cooperation. We´ve had a partner alongside us. Our project manager from GE Healthcare, Stephan Gross, has been instrumental in this work. And he has not been just a provider of equipment, he has also been a guide and advisor.”

One important factor was the layout and production of hot cells for the installation in Trondheim. Hot cells are large, lead shielded compartments where the radioactive PET tracers are handled - a central focus of safety for those making the drugs and ensuring the PET tracer is safe for patients. 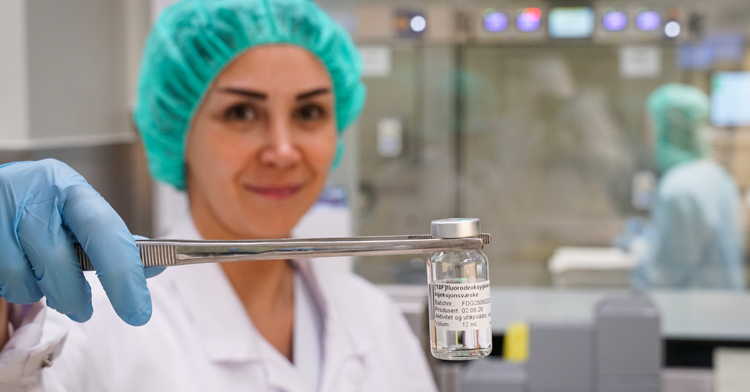 The project team went to visit the hot cell manufacturer, Comecer, in Bologna, Italy, to view the production. The relationship between St. Olav’s Hospital, GE Healthcare, and Comecer has been particularly important – and for the team in Trondheim GE's experience with multiple global installations was crucial.

TRACERcenter™ is GE Healthcare’s commercial offering that provides all the necessary equipment, training, and support for new and existing PET radiopharmacies.

For Gross, who is the manager of the TRACERcenter project management team, the team in Trondheim had one key advantage compared to other organizations going through the same process.

“In Trondheim, the whole team was assembled at the very beginning. This was a keystone step because the various individuals from different functions who will ultimately operate the PET radiopharmacy can give their input and have their preferences incorporated into the plans from day 1. Not only does this make a better setup of the project, but it also allows the local team to familiarize themselves with the whole process, and makes things move along faster,” says Gross.

Of course, every project that includes so many moving parts is bound to have some issues. Paramount for the team in Trondheim has been the ability to solve these issues with as little friction as possible, and as always, to lose as little time as possible.

Planning and problem solving was key

“The personal training we received was instrumental in preparing us for the production of our own PET tracers.”
– Oskar Middel, production leader

Since the decision was made to order equipment from GE Healthcare in late 2017, it only took St. Olav’s Hospital two and a half years to start producing their own PET radiopharmaceuticals, from the first brick in the foundation to the first patient dose. One of the most valuable experiences they have had so far is participating in the user forums that GE Healthcare hosts twice a year for their customers.

Oskar also had positive experiences with the training that went alongside the project. The content was customized to the needs and capabilities of the team at St. Olav’s. With nine months of production already under their belt, they still turn to GE Healthcare to ask for key learnings, and to make sure their facility is running as optimally as possible.

How the PET radiopharmacy was built 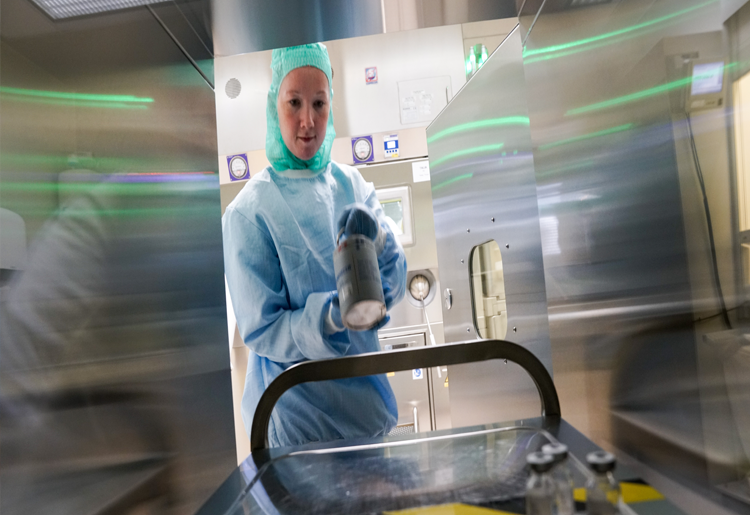 The installation of a cyclotron and a PET radiopharmacy is not a simple process and has certain requirements in terms of construction that are demanding for any organization. In Trondheim, the process involved GE Healthcare and the hospital´s own construction company, St. Olav’s Eiendom.

The installation of a cyclotron and a PET radiopharmacy is not a simple process and has certain requirements in terms of construction that are demanding for any organization. In Trondheim, the process involved GE Healthcare and the hospital´s own construction company, St. Olav’s Eiendom.

For Stephan Gross, the cooperation between the two parties was relatively smooth, although it takes time to create a proper understanding of regulations and how to work within the guidelines that have been set forth in the industry.

“You are building a production facility for nuclear material, and not many construction companies have done that before, so the understanding of why things are done the way they are, ultimately for the safety of everyone, is of course very important,” says Gross.

“There were many different suppliers involved in the project. We are very happy with GE Healthcare maintaining primary contact with all of them. It is a highly complicated process, and a lot of moving parts,” says Vibeke Holthe, who is a quality leader in Trondheim.

St. Olav’s Hospital continues to grow as a center of molecular imaging excellence with multiple ongoing clinical trials and the goal to bring the best care possible to their patients. “We are very proud and happy about what we have built here. And we give so many patients in our region a better level of care because we can produce our own PET tracers,” says Marianne Leirdal Stokkan.

The Potential Benefits of Handheld Ultrasound