Whether Farming, Brewing Beer or Working in Healthcare, this Father Makes the Environment a Priority

Whether Farming, Brewing Beer or Working in Healthcare, this Father Makes the Environment a Priority

In Zipf, Austria, Herwig Kaltenboeck and his team are working to design a more environmentally friendly workplace. With his help, and the determination of countless others, GE Healthcare is striving to reach net zero emissions across its global sites by 2050.

Herwig Kaltenboeck endeavors to live in harmony with the land. At his home in Austria, near the town of Zipf, he and his wife run a small farm where cows and sheep roam. There, they also grow barley and hops, which go into the beer made at the brewery he owns with his brother; they feed the cows the grains left over from brewing. And they’re raising their two young children — a 3-year-old daughter and 7-year-old son — to understand that to live off the land, they must also respect it. So much so that Kaltenboeck has seen his son get upset when he sees trash strewn about. “My son tells me, ‘Look, what are the people doing there? Because they harm the environment with this.’”

In his work as environmental, health and safety manager at GE Healthcare’s Zipf site, home to the Women’s Health Ultrasound division, Kaltenboeck also strives to makes choices that benefit the environment. Since 2010, he and his team have been going on what he calls “treasure hunts,” looking for changes they can make around the facility. The modifications started small: switching off lights when they’re not in use, using less paper, installing waterless urinals, setting up smart meters to monitor electricity consumption. 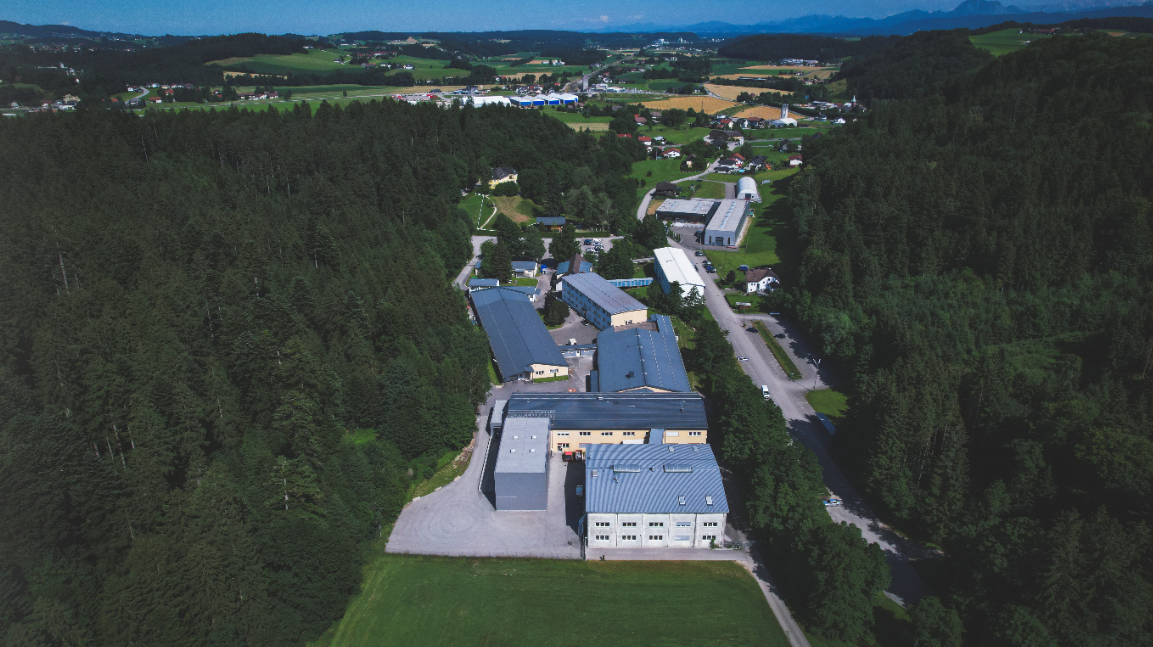 More recently, their efforts grew. In 2019, GE Healthcare strengthened its sustainability commitments globally. The company set a goal to reduce greenhouse gas emissions by 50 percent by the year 2030, and a goal of net zero by 2050, in line with the Paris Agreement. In 2020, the company reduced its emissions by 9 percent from the year prior. And in 2021, it launched a number of efforts aimed at reducing carbon emissions. It led energy reduction workshops at 22 sites that focused on cutting greenhouse gases, with at least 20 more sites participating in the eight-week workshops in 2022. To reduce emissions from its fleet of 10,000 vehicles, the company began transitioning to electric and hybrid vehicles in North America and Europe. And a number of GE Healthcare sites have shifted to renewable energy sources, including all of the United Kingdom sites, five sites in the United States, and the facilities in Bengaluru, India. And one more: Zipf, Austria. 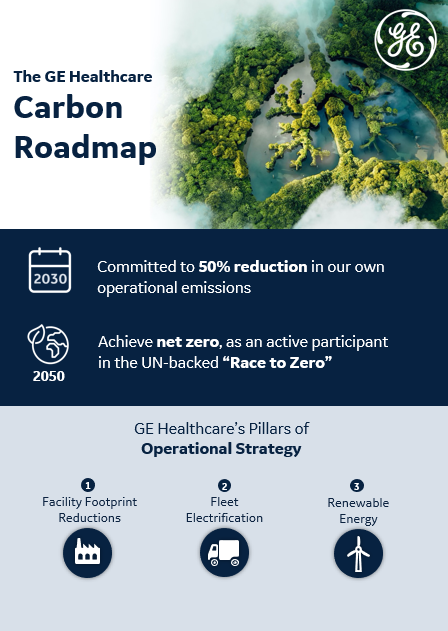 In 2021, GE Healthcare launched a program inspired by the TV show “Shark Tank,” encouraging employees to pitch projects aimed at reducing carbon emissions to a global management team; the programs that are approved get funded. The first pitch that Kaltenboeck made, along with facilities manager Brandt Bernhard, was installing solar panels at the Zipf site. Their wish was granted, and now photovoltaic cells cover the rooftops, supplying much of the facility’s electricity and reducing greenhouse gases by 50 metric tons per year. That, says Kaltenboeck, is equivalent to taking 11 cars off the road annually.[1] 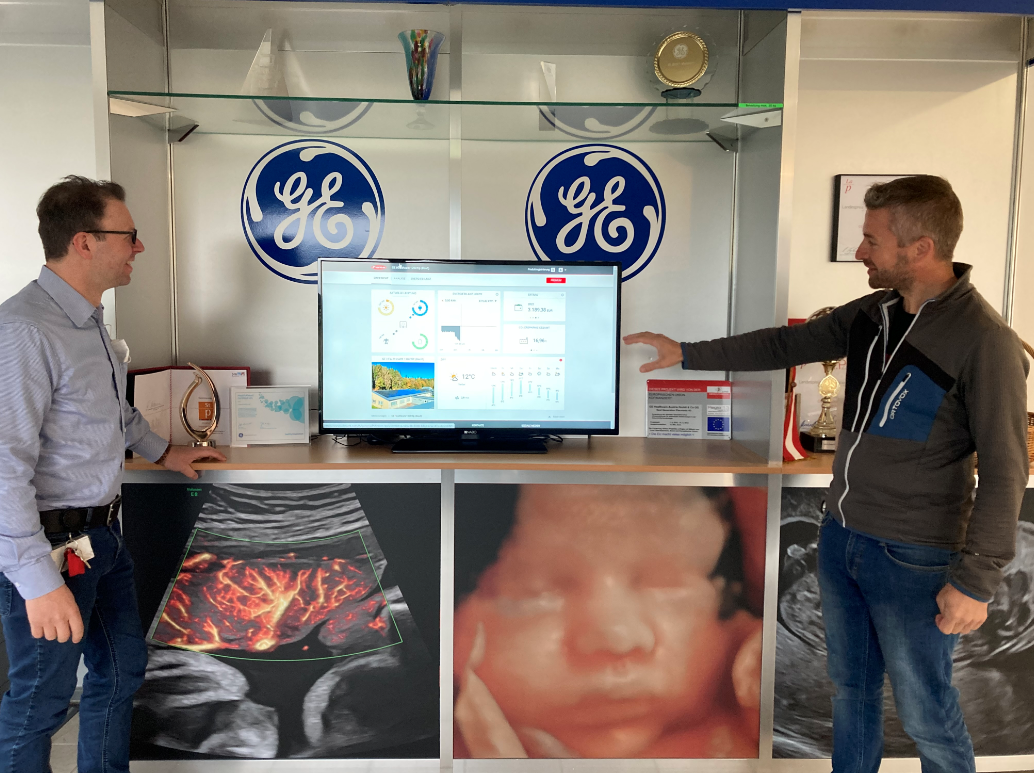 EHS Manager Herwig Kaltenboeck and Facility Manager Brandt Bernhard next to the screen at the facility entrance showing the currently self-produced electricity of the PV unit.

In 2022, Kaltenboeck and Bernhard made another pitch to GE Healthcare’s version of “Shark Tank.” They wanted to install a heat pump that would replace their gas heat with electric heat, generating it in an energy-efficient manner. That, too, was approved. Kaltenboeck says the current setup has the potential to reduce greenhouse gases from the heating system by 50 percent.

After years of taking small steps, Kaltenboeck says, the “Shark Tank” funding allows for enormous leaps. “This gives a new dimension to becoming a carbon-neutral factory, maybe in a few years,” he says. 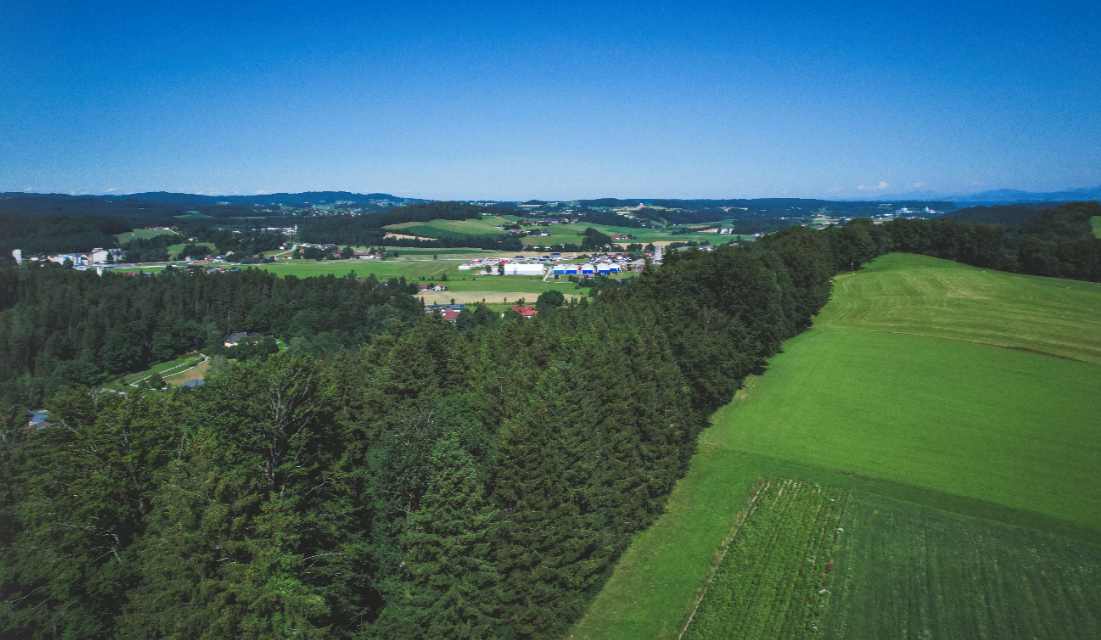 Nestled in an emerald-green forest, the Zipf site is inseparable from the nature that surrounds it. Windows look out at a burbling creek lined by wildflowers and buzzing with bees and other pollinators. When Kaltenboeck talks to friends and family about his work, he loves telling them that his company genuinely cares about its surroundings and wants to make them better. And that he and his colleagues have a voice and agency in making that happen.

And his kids? They can be proud of his work, too. Recently, he talked to them about the new heat pump — which is different from the heating system they have in their own home, where they use wood chips. And he pointed out the solar panels to his son, who, even at 7, knew exactly what they were. “He said, ‘Cool, so you produce your own electricity on the site?’” says Kaltenboeck.

In that moment, Kaltenboeck says he knew his hard work was paying off. He was making an impact on the job and teaching his children about what matters. “That’s a good feeling.”