Hours from the nearest city, through farmlands and up a steep hill, lies the remote village of Tombolo Pao, Indonesia, and in it, the woman who for years has been the unofficial caretaker of its pregnant women.

It’s an unusually daunting task in a village that has one “Puskesmas”, or community health center. Using a simple stretcher made of two plastic benches tied to two bamboo sticks, assisted by the pregnant women’s children and family when possible, Mrs. Rohani carries the laboring or in-need-of-care women the two kilometers through the mountainous path by foot.

"We can not take them directly by car, because there is no adequate road access. Even riding motorbikes is also dangerous, because the path is too small, steep, and slippery. So yes we are forced to walk about 1.5 hours before they can be transported by car, " Rohani said, speaking in her native tongue, a local dialect of Bahasa. 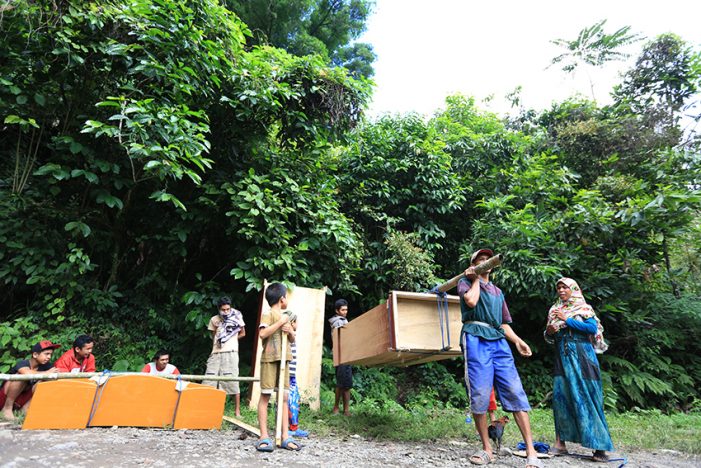 Mrs. Rohani’s story – and the impact she’s had on the population of her village – is an example of what many in India, Southeast Asia and Africa have long known – women are on the frontlines of healthcare across their countries, particularly in rural areas, and often unofficially, humbly, making the difference. It’s a topic that most recently is tackled by the documentary film Heroines of Health, which follows Mrs. Rohani, as well as an educator in India and a community health worker in Kenya, to understand how women are making a difference in the health of their communities in a way much of the world is still striving to do on a mass scale.

Produced by GE Healthcare. A film by Lisa Russell.

Mrs. Rohani., 48, grew up in Pao Village of Indonesia, ultimately marrying and moving even further into the mountains with her husband. A proud housewife, at 48 she is also a longtime volunteer midwife’s assistant, a calling that really took shape when she saw a mother giving birth in her home in their village. After the baby was born, the women’s family cut off the placenta using only sharpened bamboo, a dangerous and unsterile process Rohani remembers thinking.

Since then, she has made it a personal mission both to counsel pregnant women in her village about the importance of regular health checks and to transport them to the clinic. In a place where there is often stigma or difficulties surrounding pregnant women going to the health clinic, either during pregnancy or labor, this is a daunting task.

"When I am selling vegetables on the market, that I planted myself, I often meet pregnant women on the way to the market or back home. I ask about health check and preparation for labor," she said. “I told them that it’s okay to have a routine pregnancy check-up because the nurses and health personnel are all women, so they don’t have to worry about anything. After that, they thank me because they feel how safe it is to give birth in a health facility because all medical instruments are available.” 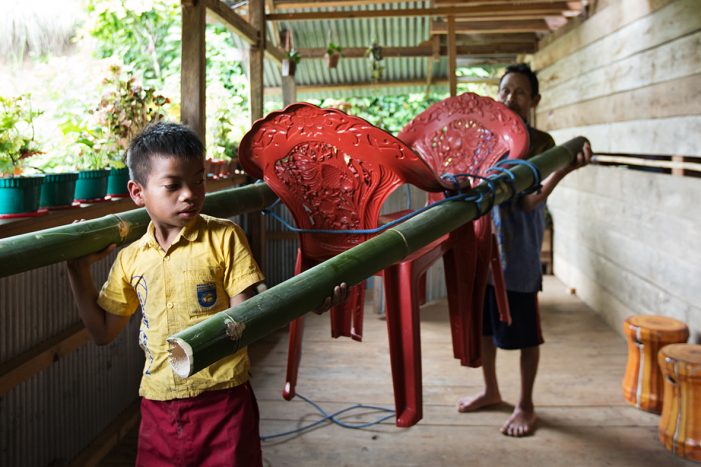 Children help Mrs. Rohani prepare a stretcher for their laboring mother, so they can make the two kilometer treck to the Puskemas.

The results are worth it, she adds. “In the end, all pregnant women in my village are willing to go to the health facility.”

Rohani speaks with a smile and deep sense of pride for her work. But with some prying, she reveals that she wishes she could do more. “I would be so thankful if I could have more higher education,” she said. With only a junior high school degree, despite her experience and the nature of the work she’s doing, she is technically only a midwife’s assistant.

“I really want to help people, even if I’m not a midwife. I can save someone’s life, even if I’m not the midwife” – Mrs. Rohani in Indonesia #HeroinesofHealth documentary PART 19 OF 30, a film told 1 minute each day. Watch for what happens next. . . . Produced by @gehealthcare . A film by @lisarussellfilms #globalhealth #unitednations #wha #girlpower #worldhealth #womenwill #Indonesia #womanpower

For her dedication, she has become a local heroine, where she says that as much as she feels guilty that she is not always able to cook rice or dinner for her husband, her work is possible because he and the rest of her family encourage her work. When the Heroines of Health documentary was filming, locals swarmed nearby proud to see her being recognized.

Outside her village, she is starting to receive recognition too.

In May, Mrs. Rohani was one of 13 women to receive the Heroinse of Health award at the 70th World Health Assembly in Geneva, and was presented the award in a ceremony in Jakarta in July.

Dr Eni Gustina MPH, the Director of Family Health for the Ministry of Health of Indonesia, spoke about how Rohani, even as just one woman, has helped the country to suppress maternal and infant mortality, both in the prenatal and postnatal phase.

"We are concerned that the mortality of mother and baby during pregnancy, childbirth, and postnatal still reaches 400 cases per month. We should have more people like Mother Rohani, in order to keep the mortality down," she said. 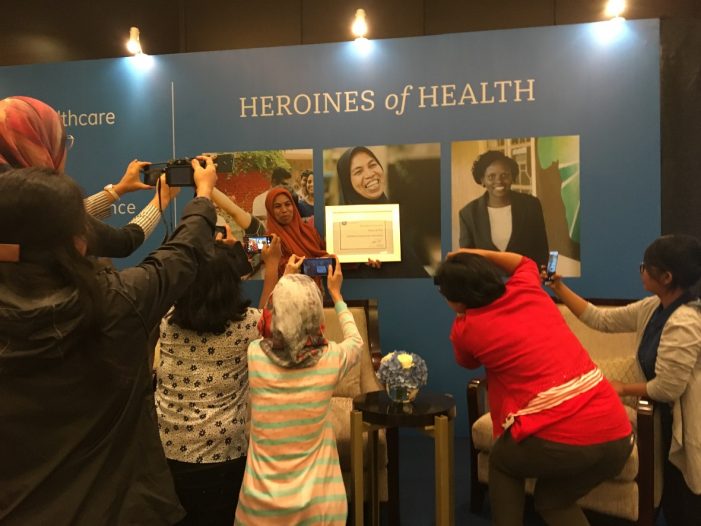 Mrs Rohani, smiling as she poses with her Heroines of Health award during the presentation in Jakarta in July 17.

Based on in 2014, 4,890 cases in 2015 and 4,912 cases in 2016. According to the Ministry of Health, the lack of awareness and knowledge of women about prepartum and postpartum risks are significant factors contributing to rising maternal mortality. In this way, Mrs Rohani’s work is life-saving.

In June, the documentary that features Mrs. Rohani, Heroines of Health, premiered with more than 3 million people now watching her story.

At the ceremony, much of the discussion was about how while women make up nearly 75% of the global healthcare workforce, nearly half of their work is unpaid and unrecognized – such as an unpaid midwife’s assistant, in Rohani’s case. The Heroines of Health awards and the documentary seek to take a first step towards solving this, by telling these, as of yet, untold stories. 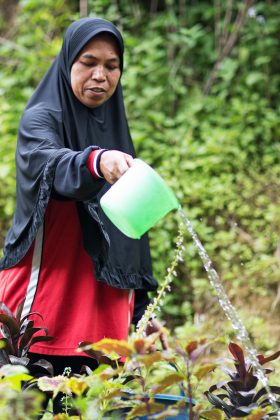 “One of the reasons for Mrs Rohani’s selection as an award winner is that she has taught the importance of basic health to the community, even though she was not paid by anyone. And with her selection, we want what she is doing to be an inspiration for other women in Indonesia,” said one of the GE Healthcare representatives for Indonesia, Haris Izmee, at the awards ceremony in Jakarta.

After her trip to Jakarta and receiving her award, Mrs. Rohani for her part plans to continue her work as before. The documentary, for her, is a source of pride, a chance to show others how people in her small village live their lives.

“I hope every young woman who watches this documentary will become a lot better person than I am, I hope there will be my someone who continues my work as a successor, because I’m getting older now,” she said. “But I promise to help every pregnant woman as long as I live.”