When most people think about vaccines, they don’t think about cows. But fetal bovine serum (FBS), a blood byproduct of the meat industry, is a crucial building block for vaccines. So scientists making the vaccines need to know precisely which country the serum is coming from because the serum could contain specific bovine viruses or infectious agents.

Different countries of origin pose different viral risks. Diseases tend to be region-specific — so serum coming from the United Kingdom might have been exposed to mad cow disease, while the serum in Brazil might be at risk for foot and mouth disease. While vaccines do not transmit these diseases, it is a matter of maintaining the public’s trust by ensuring that they are free from any contaminants. As a result, serum from cows in places with low viral risk, like New Zealand, Australia and the United States, is more expensive than serum from higher-risk places like Brazil. This opens the door for fraud.

New Zealand-based Oritain, a company that tests food and other products to prove country of origin, is now working with GE to make the market more transparent by testing FBS. “There's a lot of risk around fraud,” says Sam Lind, science and operations director at Oritain. His company tests samples — such as milk powder, beef or honey — and compares them to previously tested and confirmed products from the same companies for consistency. “This way, customers have real information even when they are dealing with resellers.”

Oritain contacted GE Healthcare in late 2015 about developing an FBS-testing technology that could determine where any given batch of serum came from. GE purchases FBS from collectors and then processes, filters and bottles the serum to sell to researchers or pharmaceutical companies working on vaccines. “These are FDA-regulated products that go into children and adults. This is beyond simply customers demanding proper labeling,” says Robert Curry, GE Healthcare senior product manager for cell culture serum. “There is an ethical component to demanding the product is safe.”

FBS also plays a huge role in biopharmaceuticals, also known as biologics, which have amazing potential. Made from sources such as living cells, tissue or FBS, they show promise for treating diseases like cancer or rheumatoid arthritis because they so closely mimic the human body’s own defense mechanisms. They can provide an ailing body with key proteins (such as antibodies), sugars or nucleic acids (including DNA and RNA). This new class of drug is also very popular, accounting for seven of the top 10 bestselling drugs. In order to keep these drugs in production, scientists need to feel confident about where their FBS originated.

Lind says each serum has its own chemical fingerprint based on where the animal was raised. “To verify where the sample came from, we analyze it for those chemical parameters,” he says. Lind and his team compare the samples across more than 20 different variables and check them against a database of verified samples GE has sent Oritain over the past few years. 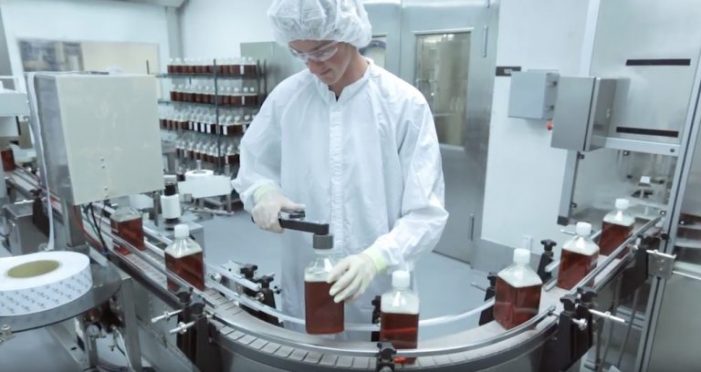 Top: A New Zealand-based company called Oritain is working with GE to prove the country of origin for fetal bovine serum, a crucial element in making vaccines. Above: Oritain says each serum has its own chemical fingerprint based on where the animal was raised. Oritain compares FBS samples across more than 20 different variables and checks them against a database of verified samples. Images credit: Oritain

With the new testing program, which officially rolls out this month, Oritain will review batches of FBS that GE recently produced from Australia, New Zealand and the U.S. Once the serum has been tested, Oritain will provide a certificate to go along with the FBS lot number stating its country of origin and publish its findings on a log for GE’s customers to review independently.

“We envision this testing being a differentiator in Asia, where serum fraud is more common,” Curry says.

In extreme cases, customers could even send their own sample to Oritain to verify its origin. Although there is no specific legislation requiring FBS country-of-origin labeling, Lind says this work will set a precedent. “This is the start of an important global pharmaceutical industry,” he says. “What we want is to have a framework where a product test is possible at any point in the supply chain so that people operate in an honest way.”