It’s called Cadmium Zinc Telluride, or CZT, and its crystals grow slowly in a furnace room over the course of about ten days

When gamma camera technology was first demonstrated in 1957, the combination of whole-organ imaging and three-dimensional scanning was a technological marvel of the decade, up there with color TV. Of course, TV has changed since then… but SPECT/CT has remained largely in the age of cathode -ray tube sets.

Rambam Hospital in Haifa, Israel was the first in a new generation of SPECT/CT scanners that is dramatically changing the way scans could be carried out in future. Now with the latest advancements on these types of scanners, they can now reduce dose or time by up to 75%#*.
Another was unveiled at Barnes-Jewish Hospital in St. Louis, U.S., in 2016. Since then, there are several installations around the world, and a number of systems planned for deployment this year.

“The conventional technology has been around for almost 60 years without any major changes,” said Nathan Hermony, general manager of nuclear medicine at GE Healthcare. “It’s as if the radio industry was still using vacuum tubes. We are changing the status quo.”

In standard SPECT/CT scans, a radioactive tracer is injected into the blood stream. The tracer will bind to, and label, certain molecules in the body. This allows clinicians to follow a drug’s path, or track a tell-tale chemical indicating a disease, like Alzheimer’s or Parkinson’s. 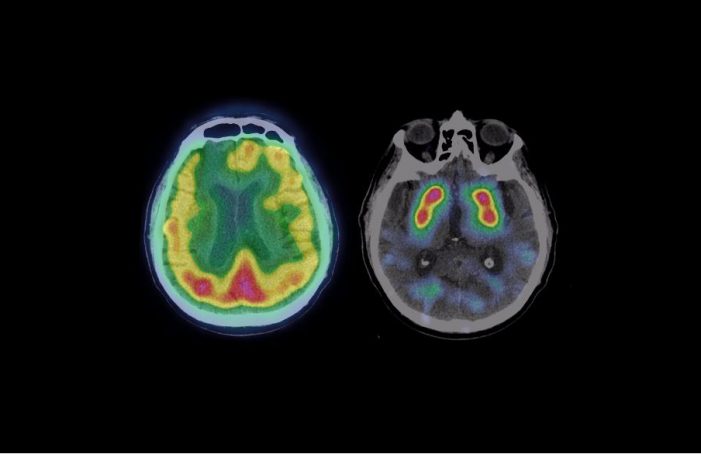 Different tracers bind to different substances in the body. They give off gamma-ray photons, which are picked up by the SPECT/CT scanner’s detector.

However, the detector can typically pick up the photons given off by one kind of tracer at a time. This means that new scans, with fresh injections of tracer, need to be performed every time clinicians want to look at the activity of a different molecule in the body.

This is where developers at GE Healthcare worked their magic: they have created a new kind of detector that can not only track several tracers at once, but also uses digital detectors to image the patient—an industry first for this type of general purpose scanner.

What makes this possible is an innovative material called Cadmium Zinc Telluride, or CZT.

Its properties are almost too good to be true for SPECT/CT imaging: they convert photons directly into electrical signals, bypassing several steps of processing that go on under the hood of traditional scanners, each one diminishing the quality of the final image.

“It’s the same as listening to someone through an extra door,” Hermony added. “What’s being said gets lost unless they raise their voice.”
For medical imaging, this development is like jumping straight from VHS to HD DVD in terms of image quality. A CZT detector can take images in far higher resolution and of several tracers at once.

For patients, this means that they no longer have to hold uncomfortable positions for multiple scans. This is SPECT/CT imaging for the modern age: where the patient’s comfort and well-being comes first.

CZT doesn’t grow on trees, however. The material is made to order in a long, complex laboratory process that takes around ten weeks from start to finish.

“There are 440 steps in the manufacturing process of the CZT detectors,” said Noam Zilbershtain, General Manager for GE Healthcare’s Rohovot Digital CZT Detectors Center of Excellence in Rehovot, Israel. “The process starts with a pre-growth preparation. Then we load the raw materials into an ampoule. This is followed by a very sophisticated filling process before we start to actually grow the crystals.”

The crystals grow slowly in a furnace room over the course of about ten days. Large CZT ingots are then cut, like jewels, into segments and wafers thin enough to work as radiation detectors.

After many more hours of processing, including blasting the wafers with plasma and indium evaporation, they are assembled into detector modules and their performances are thoroughly tested under radiation.

“It’s a long, unique process, and it’s very tightly controlled in order to achieve the capacity, quality and reliability we need,” added Zilbershtain.
“This is only the beginning for CZT,” he added. “It has so much potential for other applications like photon-counting systems, or for homeland security in airport scanners and the like.”

Welcome to the age of CZT, the wonder-material that will help everyone get a much clearer picture of the world around us, and inside us, than ever before.

#*Together with Clarity 2D/Evolution1 and compared to D670Pro/ES/DR without Clarity 2D/Evolution12, As demonstrated in phantom testing using NEMA IEC Body Phantom. 1In clinical practice, Evolution options1a (Evolution for Bone, Evolution for Cardiac, Evolution for Bone Planar) and Evolution Toolkit1b are recommended for use following consultation of a Nuclear Medicine physician, physicist and/or application specialist to determine the appropriate dose or scan time reduction to obtain diagnostic image quality for a particular clinical task, depending on the protocol adopted by the clinical site.
1a Evolution Options – Evolution claims are supported by simulation of count statistics using default factory protocols and imaging of 99mTc based radiotracers with LEHR collimator on anthropomorphic phantom or realistic NCAT – SIMSET phantom followed by quantitative and qualitative images comparison.
1b Evolution Toolkit – Evolution Toolkit claims are supported by simulation of full count statistics using lesion simulation phantom images based on various radiotracers and collimators and by showing that SPECT image quality reconstructed with Evolution Toolkit provide equivalent clinical information but have better signal-to-noise, contrast, and lesion resolution compare to the images reconstructed with FBP / OSEM.