What's 140,000 times stronger than earth's magnetic field and can see inside your head? This elephant-sized magnet

The University of Iowa was one of the first facilities to install an actively shielded 7T MR system*, one of the most powerful MR platforms available for research purposes 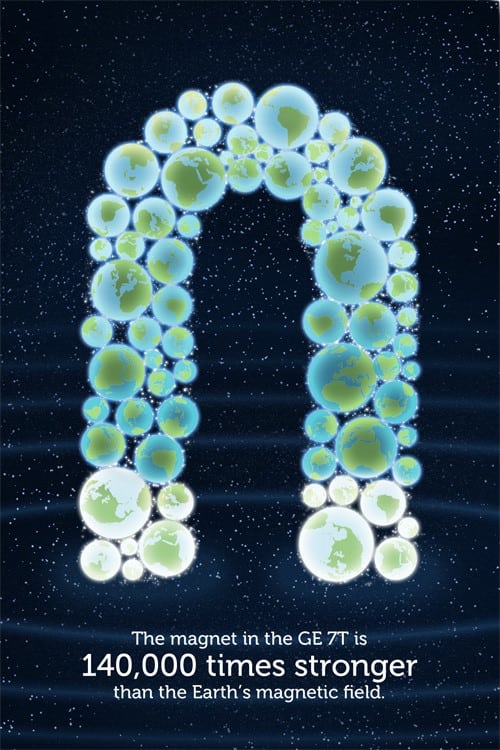 June 2014 marked a new era of imaging at the University of Iowa. After decades as a leading MR research facility, the university installed a GE Healthcare 7T platform, one of the most powerful MR systems available for research purposes. University of Iowa researchers hoped it would help them better understand the brain, from psychiatric illnesses like bipolar disorder to epilepsy and Parkinson’s disease. As one of the first research centers in the United States to install the system for use in research applications, the university is now seeing results from this innovative project.

Vincent Magnotta, PhD, professor of radiology at the University of Iowa, studies new imaging approaches and analysis strategies for psychiatric and neurological brain disorders. He says the university chose the system based on its ultra-high spatial resolution, or its ability to produce highly detailed images of the smallest structures, with the hope to better understand the brain.

“Those hopes really have materialized,” he says. “The robustness of the system has allowed us to look at things in finer detail than what we could at lower field strengths. We can get higher spatial resolution and better spectral resolution, so those things really have come to fruition.” 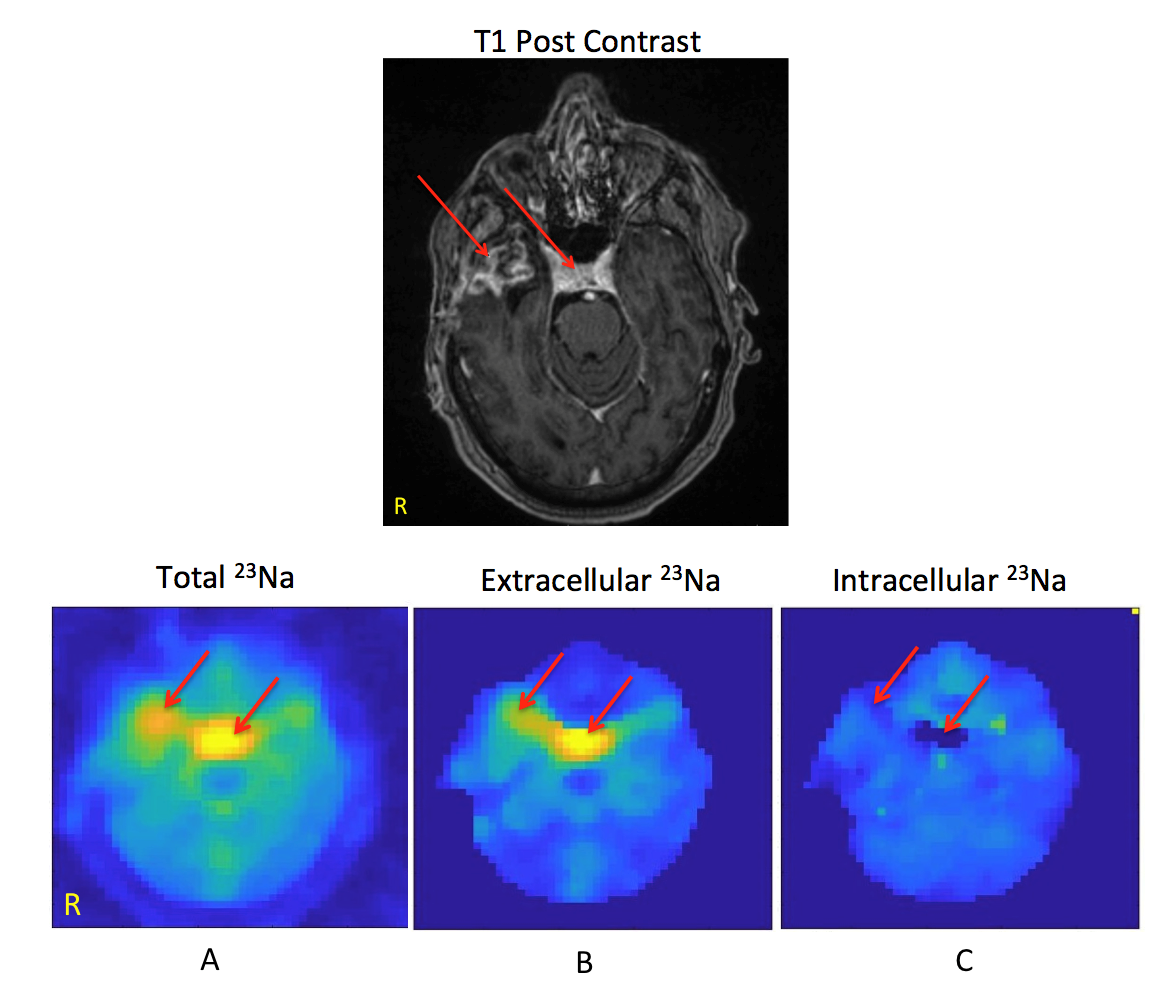 Seeing inside a glioblastoma brain tumor with conventional contrast-enhanced imaging and sodium imaging. The T1 post-contrast image (top) shows enhanced signal from the tumor on the patient’s right but also the cavernous sinus and the pituitary gland. Sodium images (bottom row) showing the total sodium concentration (A), and the fractions outside (B) the cells and inside (C) the cells, help isolate the tumor. Having a single RF coil for both conventional imaging and sodium imaging makes the experiment much easier for both the patient and the technologist.

“T” stands for Tesla, named after famed invetor and engineer, Nikoa Tesla, indicates the strength of the magnet. The standard clinical MR system is either 1.5T or 3.0T. A 7T magnet is 11 feet long and weighs 42 tons – the equivalent of six adult male elephants. This incredible mass gives it exceptional power to help detect miniscule structures inside the body, including molecule-sized byproducts of cell metabolism such as levels of glucose and acidity.

The 7T platform uses a powerful 7 tesla magnetic field and radio waves to create 3D images of internal structures and organs, such as the brain. This magnet can generate a magnetic field that’s 140,000 times stronger than the Earth’s magnetic field.

A 7T magnet employs the same basic technology as a standard clinical magnet, but uses about 10 times more wire and stores approximately five times more energy than a 3T magnet used by many doctors today.

Engineers must cool the 7T’s wiring to just 4 degrees Kelvin above absolute zero, the coldest temperature possible, to achieve superconductivity and generate the device’s powerful magnetic field. It takes at least two weeks and 10,000 liters of liquid helium to cool the magnet down, and then it takes about 40 hours to charge the magnet for use. Once energized, the magnet can maintain performance for years.

7T images: High resolution images of the right hippocampus in an epilepsy patient show the tissue volume loss. The left image is T2 weighted and shows cerebral spinal fluid (CSF) around the hippocampal head, while the right image uses FLAIR to suppress the signal from CSF and reveal the anatomy more clearly.

Higher magnetic field strength means more magnetization, or more “signal,” which can get traded off for either less scan time or better spatial resolution (sharper images). 7T also changes the contrast in the images, allowing better depiction of small structures based on differences in tissue structure and chemical content.

Since the installation, more than 20 researchers have used the 7T system to study neurological processes, conduct orthopedic and cardiovascular imaging, and study oncological applications.

“We've identified that higher resolution is very beneficial for us to be able to, for example, study the hippocampus in Alzheimer's disease, and it also has identified new challenges where we need to go next,” says Magnotta.

The 7T MR system also enables high-resolution diffusion imaging, which means researchers can now investigate structures within the white matter of the brain, the brain stem and the cerebellum. “It allows us to study things in more detail, including areas that often have been left out of our understanding of psychiatric neurological disorders,” says Magnotta. “The higher resolution is clearly an advantage able to delineate brain stem regions, and that opens up new capabilities.” 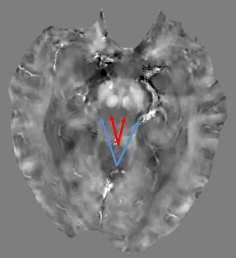 Imaging at higher field strengths can cause susceptibility artifact, a blooming distortion in the image caused by a sharp contrast tissue and air or metal, for example. Susceptibility artifact is common in the brain, such as the sinuses, for example. Using 7T, variations in susceptibility can reveal small anatomical structures like the red nuclei (red arrows) and the substantia nigra (blue arrows) that you cannot normally visualize at a lower field strength.

Most notably, Dr. Magnotta and his team have had significant success investigating bipolar disorder. His team discovered previously unrecognized differences in the brains of patients with bipolar disorder, particularly in the white matter and the cerebellum, which wasn’t previously linked with the disorder. Their research also indicated that cerebellar differences were not present in patients taking lithium, the most commonly used treatment for bipolar disorder, which could have a significant impact on treatment decisions for the disorder.

In addition, Magnotta’s team conducted a small epilepsy study of 10 subjects. He scanned them on a 3T scanner, then the 7T system.

“At 3T, they scanned as normal, or essentially there was no area of seizure focus that could be localized,” he says. “We then scanned them on the 7T, and in eight patients we found areas where there was likely an area of seizure focus. That localization could only be obtained with 7 Tesla images because of higher spatial resolution.”

The team is also using the 7T system to research depression and potential new treatments such as ketamine, most commonly used in surgical anesthesia. Some researchers are using the system to study osteoarthritis, where the high resolution improves views of the thinnest cartilage within joints. The 7T system is also being used in oncology applications to help better detect tumor boundaries and conduct sodium imaging, which detect tissue sodium concentration to identify potential disease.

He says this has opened up new avenues of research interest, with the potential to more accurately detect tumors at earlier stages. It also offers exciting potential to help impact patient outcomes across multiple kinds of cancers.

“There’s new interest in how we can use sodium imaging to assess tumors, and take it from the brain and apply it to other regions of the body, such as the breast,” he says. “That's something that's on our road map for the future.”

*The GE 7T technology is in development and this article represents ongoing research and development efforts. These technologies are not products and may never become products. Not for sale. Not CE-marked and not cleared or approved by the U.S. FDA or any other global regulator for commercial availability.