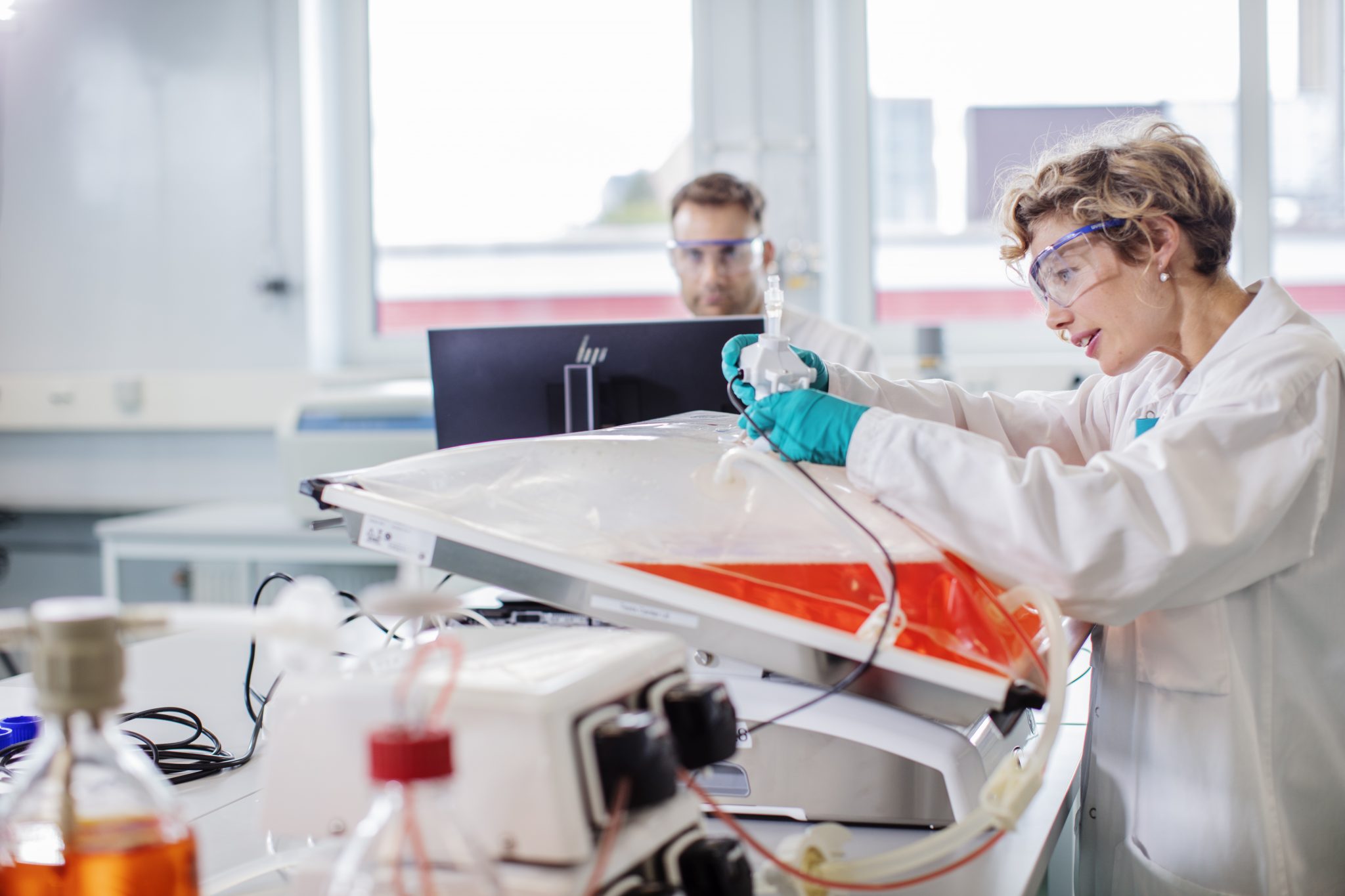 Since she was a child, Therése Kallur has been interested in how the mind works. Today she makes spare parts for it.

“When I started studying psychology, I was deeply unsatisfied because I thought that we just brushed the surface,” she says. “That’s when I got interested in the brain, because that’s actually where the stuff happens.”

So she dug deeper, getting a degree in molecular biology and a doctorate in experimental neurology. She puts that education to use running Business Development for BioLamina, a Swedish biotech whose technology, among other things, helps replace dying neurons in patients suffering from Parkinson’s. The company does this by manufacturing a special type of protein that encourages pluripotent stem cells — basically blank-slate cells that can develop into any organ in the body — to turn into brain cells, heart cells, eye cells, and more. Earlier this year, BioLamina partnered with the Danish pharmaceutical company Novo Nordisk to help it develop stem-cell-based therapies for Parkinson’s and other diseases. 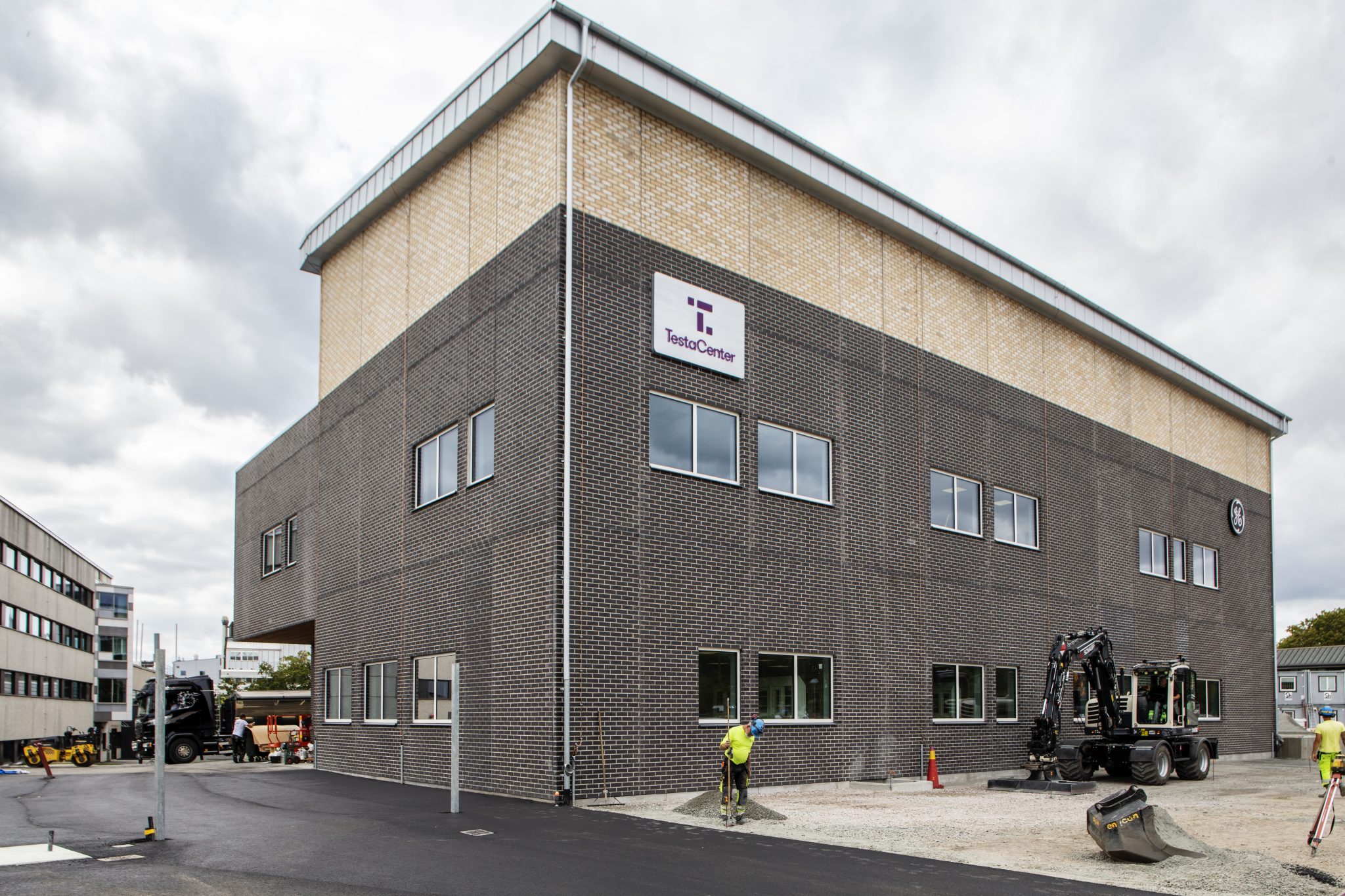 Turning a stem cell into a brain cell isn’t easy. The proprietary process developed at BioLamina involves building a special environment from the proteins, called laminins, so that they prompt stem cells to turn into the desired cells. Laminins are “like a canvas,” Kallur explains, “and the stem cells are the paint.” They engineer the proteins inside cells living in high-tech vats called bioreactors. As they grow in the bioreactor, the scientists must feed the cells, keep them warm, let them breathe and allow them to leave waste products. “The cell nutrition, oxygen and temperature levels have to be exactly right – the tuning is a delicate process,” Kallur says.

BioLamina got the process down in a lab, but to go to market, the company needs to scale up. That’s why Kallur signed up to the Testa Center, a research facility that opened this week on the campus of GE Healthcare Life Sciences in Uppsala, Sweden. The center, funded jointly by GE and the Swedish government, will help companies like BioLamina develop and fine-tune their manufacturing processes so they can jump to large-volume production.

BioLamina will be the first company using the Testa Center, spending six months getting its production process ready. “We’re now in the perfect phase where we need some help to actually scale up,” Kallur says. “We will have our own staff at the Testa Center and when they are fully trained, we will bring everything over to our facility.” GE Healthcare and Sweden’s innovation agency decided to build the center two years ago. GE Healthcare invested 4.5 million euros in the facility — supplying bioreactors and other technology and providing employees to staff it — and is interested in staying involved in the latest medical breakthroughs. Companies, institutes, and universities can use the Testa Centre services for as little as two weeks to as much as six months, like BioLamina. “Innovation is the foundation of our business,” says Lotta Ljungqvist, the former head of research at GE Healthcare’s Life Sciences business and now GE’s CEO for the Nordics and Testa Center. “We need to understand the small startups now because that will drive our business in a couple years.” She says that the resulting “flux of intangible knowledge” will allow GE to reduce its risk in developing new products and also give companies a safe space to test their production. “This is so needed.” 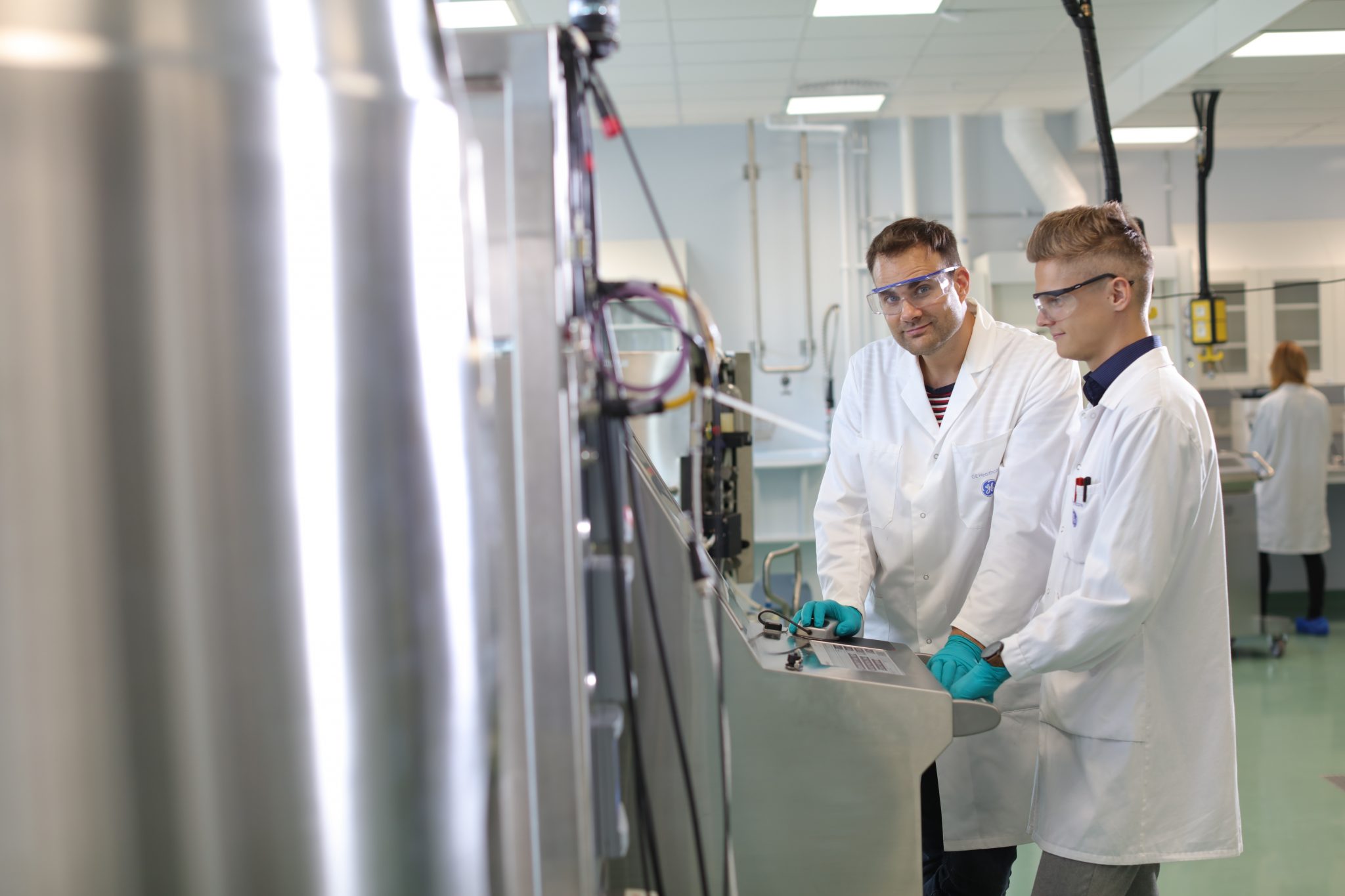 Sweden’s innovation agency, which invested 10 million euros into the project, is also looking at the big picture. The country has a long history of medical innovation. In the 1660s, the University of Uppsala — located across town from the GE campus — opened the world’s second-oldest “anatomical theater,” where students and professors could watch autopsies. Some may have been attended by Anders Celsius, an Uppsala native and the inventor of the Celsius scale, who taught astronomy at the university. Today the government wants to make it easier for medical startups and midsize businesses, as well as university researchers, to develop their ideas into viable businesses, just like their digital brethren Skype or Spotify.

BioLamina, for example, started nine years ago in the laboratory of Karl Tryggvason at the Karolinska Institute in Stockholm. Tryggvason, who spent his life researching laminins, launched the company with his son Kristian. Kallur, who joined in 2010, says the team initially worked one floor up from the elder Tryggvason’s office at Karolinska before moving to their own quarters. Over the years, they hired more scientists who helped them engineer a number of research-grade laminins that can turn stem cells into rods and cones for retinas damaged by macular degeneration, cardiac muscle cells called myocytes for bad hearts, and dopaminergic neurons for brains afflicted by Parkinson’s. They sell the laminins to pharmaceutical companies that are now broadly being used in global collaborative initiatives.

“The demand for our high-quality laminins is growing and we need to scale up our capacity,” says Kristian Tryggvason, BioLamina’s CEO. “The Testa Center gives us a unique possibility to do this internally, instead of relying on large global contract manufacturers.” 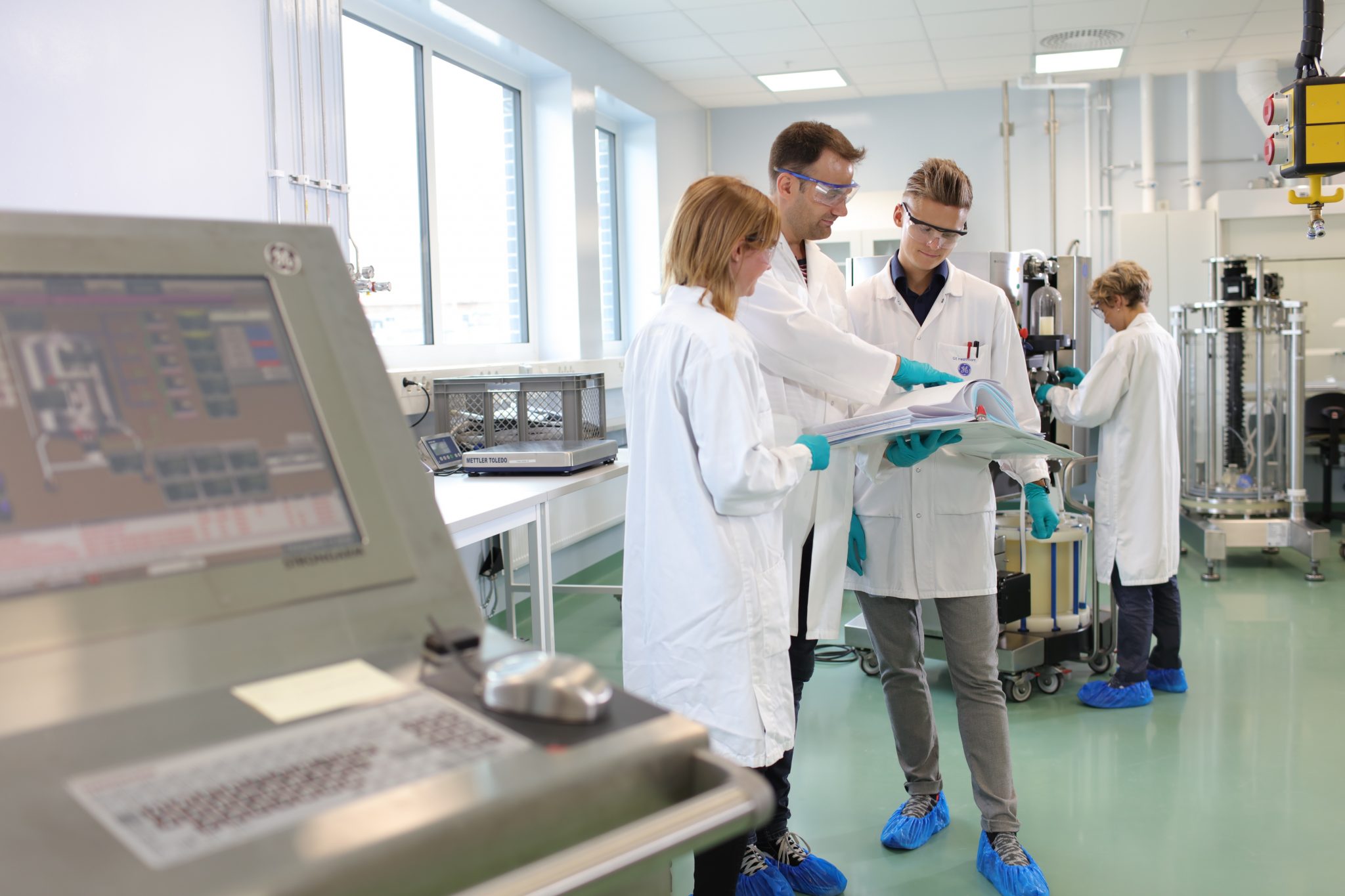 A testbed for innovation in biomanufacturing

The center, a brand new, 27,000 square feet two-story building, includes four bioprocess laboratories and two common labs for buffer preparation and analytics. The bioprocess labs — each the size of a large classroom — are designed to represent an industry-standard production suite with everything needed for a bioproduction process from start-to-finish, including purified water, gases for cell culture and air lock for sterile work. If needed, the labs can also be upgraded to so called biosafety level 2 standards, allowing companies to handle milder viruses like influenza. “The building mimics the real needs of the pharma industry,” says Jesper Hedberg, director of the Testa Center.

Besides companies working with stem cells like BioLamina, and universities conducing education and general research, future users of the Testa Center will include — for example — vaccine developers and companies using viruses that reprogram white blood cells to help the immune system sniff out and kill cancer*. Another focus will be the manufacturing technologies for the production of biopharmaceuticals -the world’s fastest-growing classes of medicines, which include blockbuster drugs like Humira, Remicade and Rituxan, designed to fight autoimmune diseases such as rheumatoid arthritis and psoriasis. 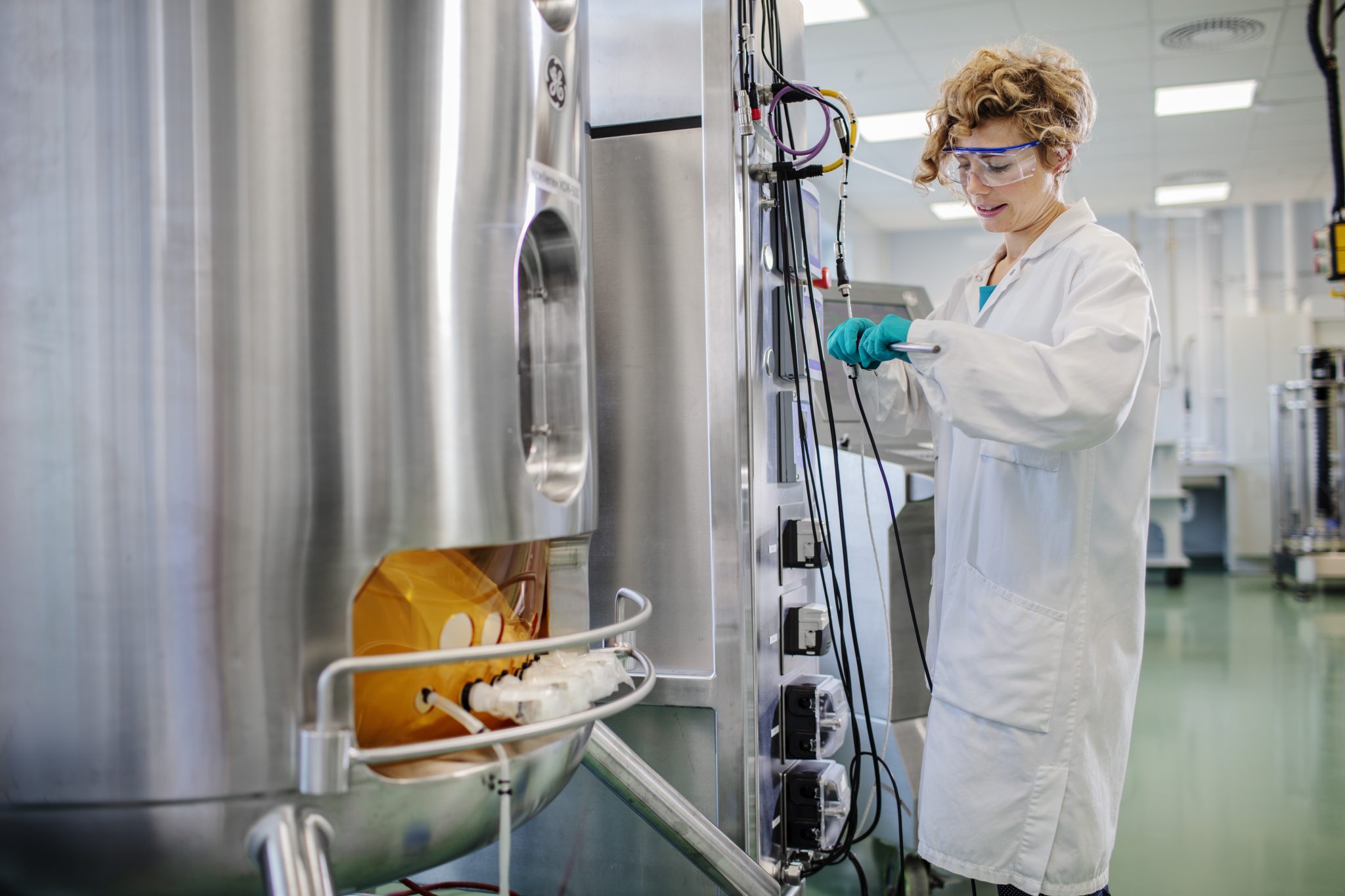 GE Healthcare Life Sciences in Sweden develops and manufactures different technologies and materials that drug companies need to mass-produce these medicines. “The last 10 years have seen a silent revolution in the pharma industry,” Hedberg says. “Biologics are molecules that are similar to those we have in our bodies. These drugs often have better specificity and smaller side effects and therefore work better, but their production is more complicated. This center will help companies, including GE Healthcare, find new ways to make them faster and cheaper.”

As for BioLamina, its team is busy building their proteins in the Testa Center. And Kallur is already thinking about future applications of the molecules, including using them to print tissues. "3D printing is so cool and it can be applicable,” she says. “Right now, it still needs some work. I’m not totally convinced that it could be used to replace whole body parts, but it could be useful for printing tissue for screening drugs.”

She’ll be able to hash these and other ideas out with fellow researchers, GE Healthcare employees and visiting students during breaks at the Testa Center’s common cafeteria — which was designed to spur sharing and collaboration says Hedberg: “It’s a sandbox where they can play with the equipment and figure out the process.”

*The Testa Centre is open to any applicant in a transparent and non-discriminatory way.