More than 60% of breast cancer cases in India are detected at an advanced stage, but a new handheld device seeks to bring screening to areas with limited access 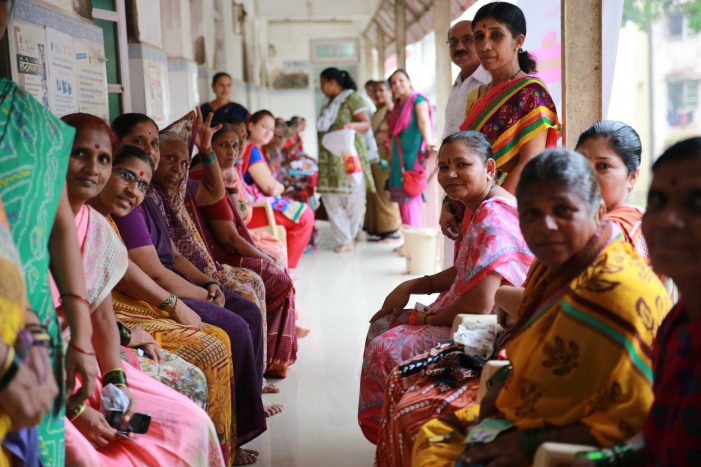 Dr. Rajshree Dayanand Katke in Mumbai, India, is literally taking control of patients’ health in her own hands.

For every two women in India newly diagnosed with breast cancer, one will die of it. India sees nearly 150,000 new cases of breast cancer every year – and more than 60% of all breast cancer cases are detected at an advanced stage, which dramatically reduces the five-year survival rates to just 52% (compared to 90% in the United States). 70,000 women die of the disease every year.

Women across the developing world aren’t regularly screened for breast cancer, and most don’t have access to mammography. Even if they do, there’s a shortage of experienced radiologists to read the results.

As the medical superintendent at Cama and Albless Hospitals and a professor of obstetrics and gynecology at Grant Medical College, Dr. Katke is pioneering the use of a new handheld device that may make it easier for woman in underserved areas of India to get pre-screened for breast cancer.

The technology, iBreastExam, was developed to quickly, easily and accurately detect abnormalities in women’s breasts. It uses no radiation and is painless, making it a great pre-screening tool for community health workers, primary care physicians, obstetricians and gynecologists to identify breast abnormalities in healthy women during routine health checkups. Designed with the intent to pre-screen for breast anomalies rather than diagnosing them, the device is significantly cheaper compared to a full-fledged diagnostic device such as an ultrasound or mammogram. Primary care services and access to early detection methods are a major cause for concern in emerging markets. iBreastExam enables early access to pre-screening in primary care settings, helping to identify woman who are at risk of breast cancer early and funnel them to the next line of diagnosis – a mammogram or ultrasound device. 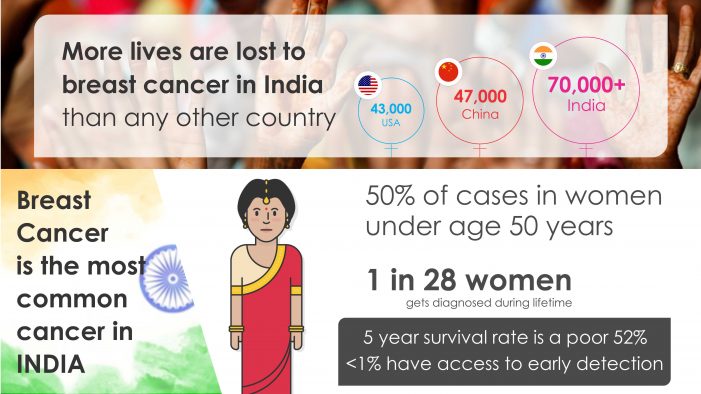 Already, more than 75,000 women have been screened in India with iBreastExam over the last year, and it has helped to identify more than 100 cases of breast cancer.

Dr. Katke has used iBreastExam for just over a year to screen nearly 50,000 women. In that time, it detected lumps in 2,251 women, of which 75 were cancerous. She says iBreastExam fills a critical gap in early detection.

iBreastExam gives her a “map” of the breast tissue that indicates if there are any abnormalities that should be further evaluated for malignancies. This early screening often leads to early treatment, which has profound effects on survival rates.

“Because the screening with iBreastExam is very good, we can treat these women at early stages, which is important because that gives them a higher five-year survival rate. It also improves the quality and the longevity of life,” she says.

The technology was developed by Mihir Shah and Matt Campisi, co-founders of UE Lifesciences. Shah and Campisi developed it based on personal experiences with the disease. Campisi’s grandmother, mother-in-law and his wife’s cousins were all diagnosed with breast cancer, and his wife’s family carries the BRCA gene mutation that makes it more likely for her to develop breast cancer. Shah’s mother-in-law in India was diagnosed with breast cancer several years ago after self-detecting a lump.

“What undermines the entire outcome for women is not getting screened and detected early enough. Systematically, there is very little access to early detection in these parts of the world,” Shah says. “That’s why these areas need a tool like iBreastExam. It puts the ability to detect small lumps in the hands of community health workers, who are really the front-line care provider to much of the developing world.” 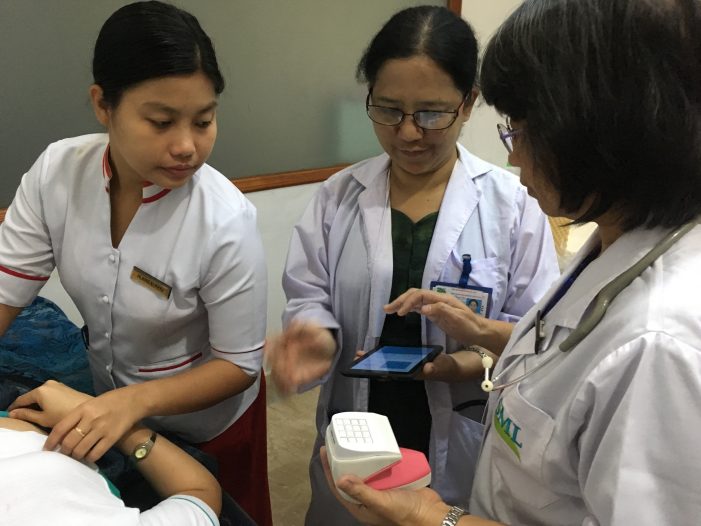 GE Healthcare has partnered with UE Lifesciences as part of GE Healthcare’s accelerator five.eight to commercialize iBreastExam in 25+ countries across South Asia, Southeast Asia and Africa. The partnership brings together UE Lifesciences’ skills to design and develop mobile health innovations, and GE Healthcare’s sales, marketing and distribution expertise in these markets to enable early detection of breast cancer in the developing world. This partnership will allow UE Lifesciences to target more than 500 million women in developing countries who can benefit from iBreastExam.[1]

Campisi says this partnership will help UE Lifesciences achieve their mission of impacting as many lives as possible.

In India, Dr. Katke sees iBreastExam as the wave of the future for her patients, with the potential for global impact. “Across the globe there are new cases and the incidence of breast cancer is rising,” she says. “For breast cancer, we need a good screening tool, and iBreastExam is a very good tool. It can help so many women.” 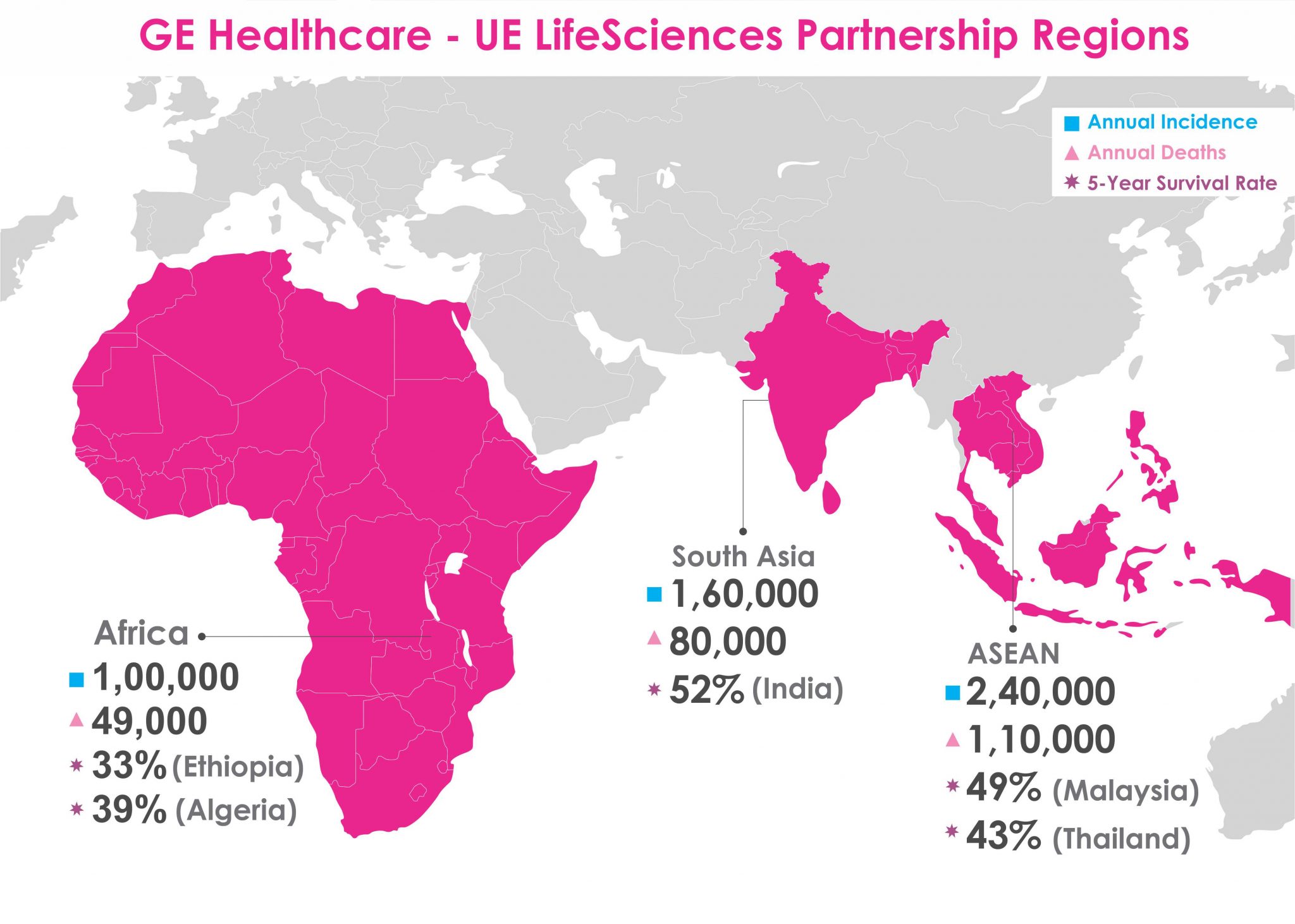