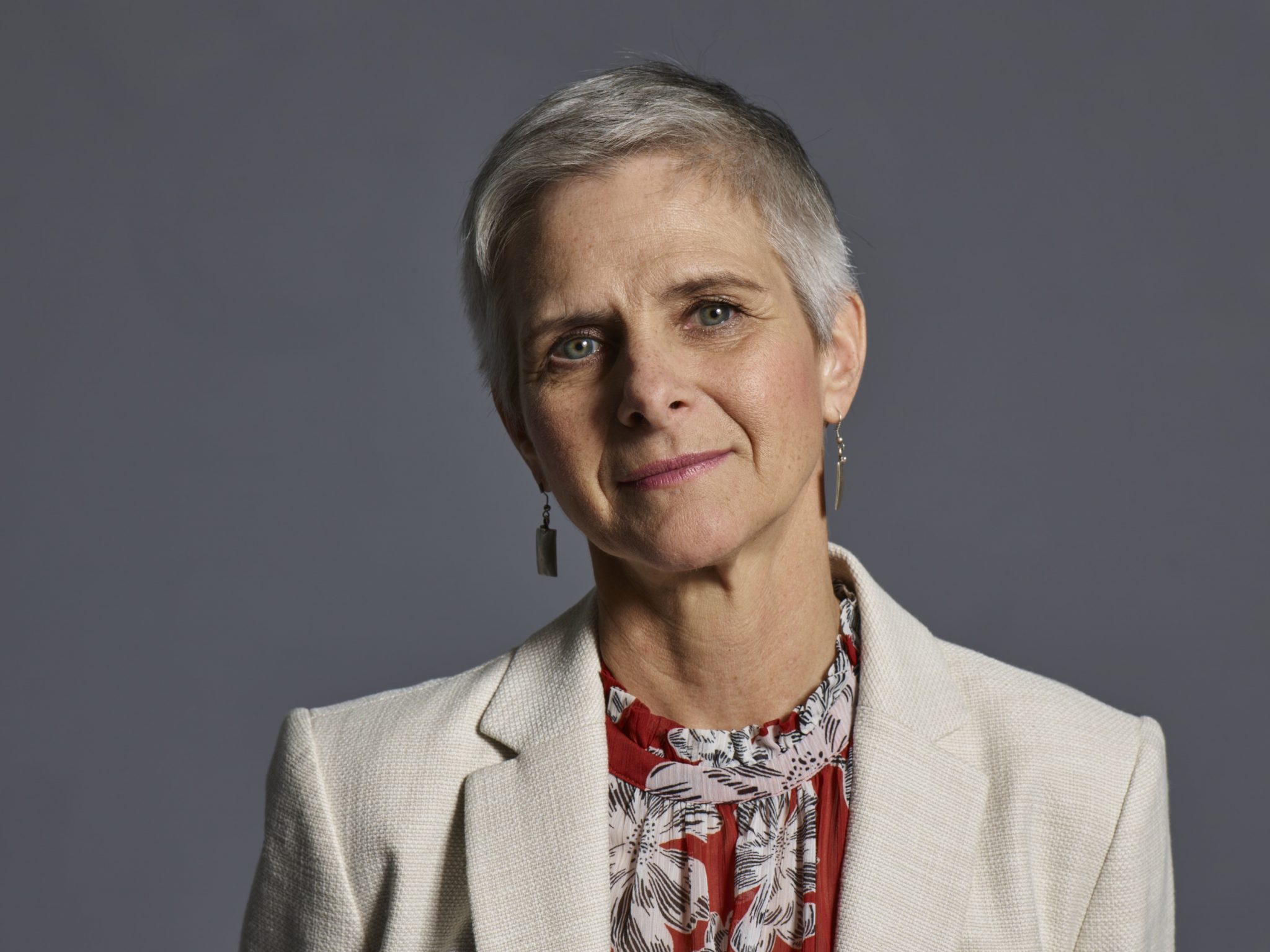 When Evelyn Lauder founded the Breast Cancer Research Foundation (BCRF) in 1993, she deliberately set up the organization without an endowment as a testament to her determination to find a cure for breast cancer. She wanted to deploy the dollars raised directly and efficiently into research and hoped BCRF would succeed so spectacularly that the organization would not be needed.

Although far too many women continue to die from breast cancer, innovative research like the projects supported by BCRF continues to advance our understanding of the disease, enabling more precise diagnosis and personalized treatment and prevention. 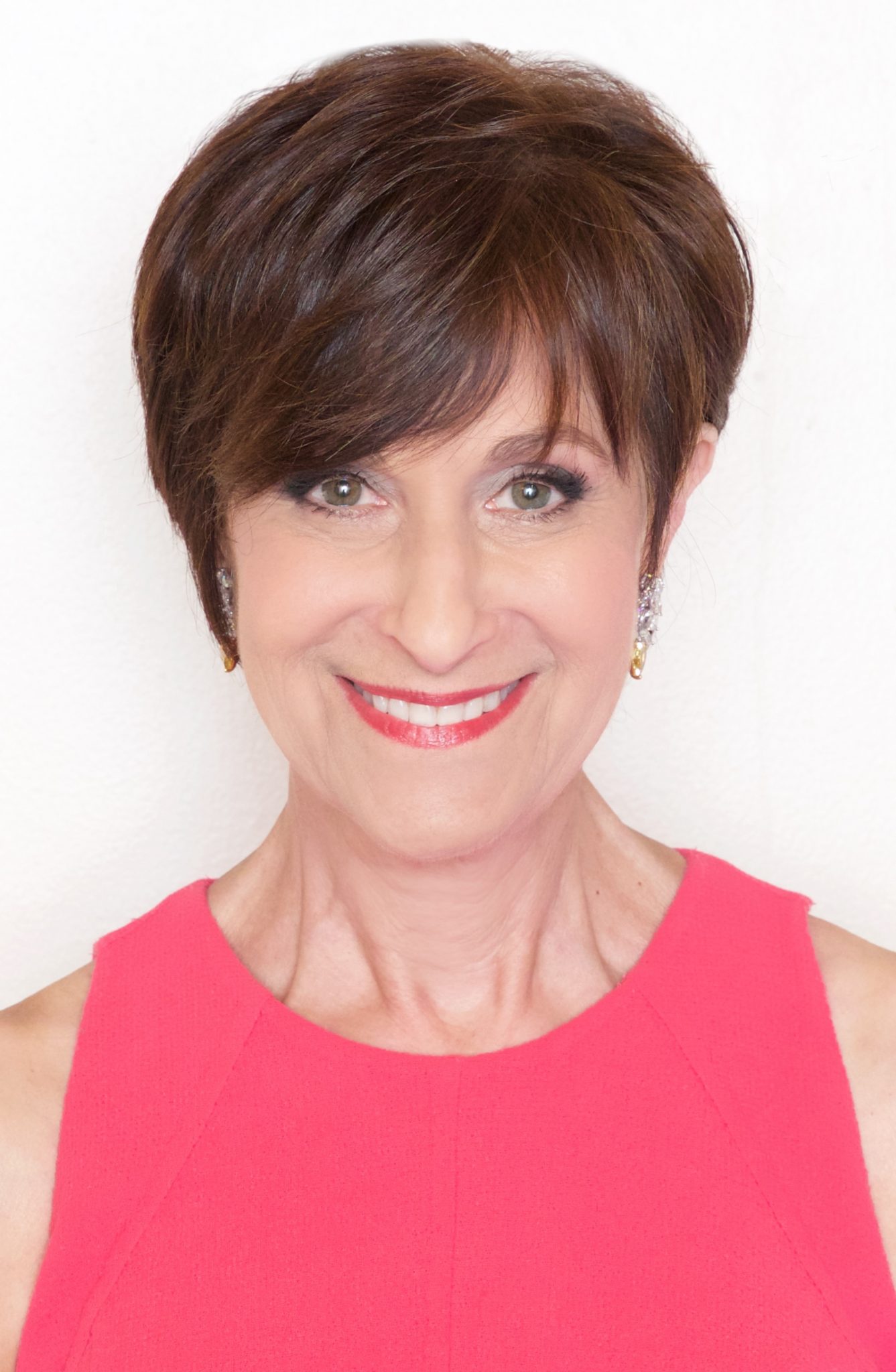 “We know a lot more about breast cancer now, and that's the reason we have seen a 40% decline in breast cancer deaths since BCRF was founded. BCRF has had a major impact on just about all the research that has influenced prevention, diagnosis, treatment and survivorship, which wasn't even a goal 15 years ago,” says Myra Biblowit, President and CEO of BCRF.

Metastasis and the role of life sciences

BCRF earmarks approximately 35% of its funding for research that investigates metastasis, when cancer spreads from the breast to other parts of the body.

“Metastasis is really the number-one killer in breast cancer. Most breast cancer deaths, if not virtually all of them, are caused by metastatic disease,” says Dr. Margaret Flowers, Director of Science Communications at BCRF. “Our portfolio has a strong emphasis on identifying biomarkers that can predict risk or identify women who are at risk of a recurrence or a metastasis. The goal is to prevent metastasis and come up with better treatments to treat metastasis so that women don't have to fear dying from this disease.”

For Dr. Flowers, this mission is personal, as she lost her mother to metastatic breast cancer 25 years ago. “If she had been diagnosed just five years ago, I believe she would have survived her breast cancer and perhaps gone on to die of old age,” she says. 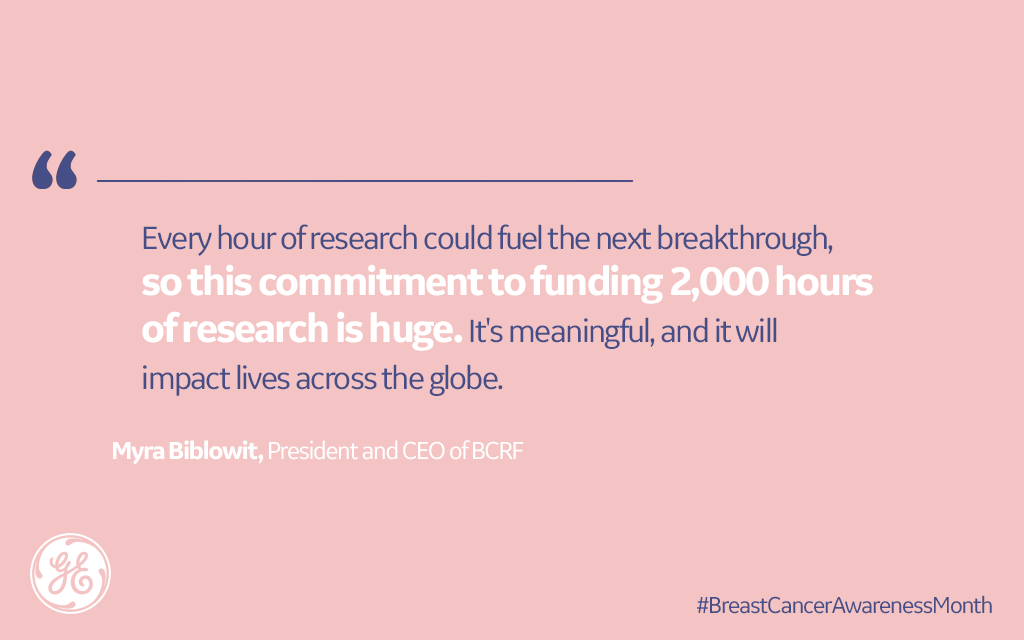 In October 2018, GE Healthcare will again donate $1 to BCRF for every purchase of its Whatman products and $500 for every GE Healthcare mammography sold in the U.S., with the goal of raising a combined total of $150,000, a 50% increase over GE Healthcare’s 2017 contribution. This donation is part of the approximately $63 million BCRF will invest in groundbreaking research conducted by 300 scientists across the United States and 14 countries. New grants were announced October 1, 2018.

“Every hour of research could fuel the next breakthrough, so this commitment to funding 2,000 hours of research is huge. It's meaningful, and it will impact lives across the globe,” says Biblowit.

From the lab to the bedside

BCRF’s research program is guided by a scientific advisory board made up of 11 experts from clinical, translational and biology backgrounds who invite researchers – whom BCRF calls investigators – to submit funding proposals. Grants are awarded and renewed on an annual basis according to how much money BCRF has raised in the last year. This funding model supports investigators, not projects, allowing BCRF researchers to think outside the box. 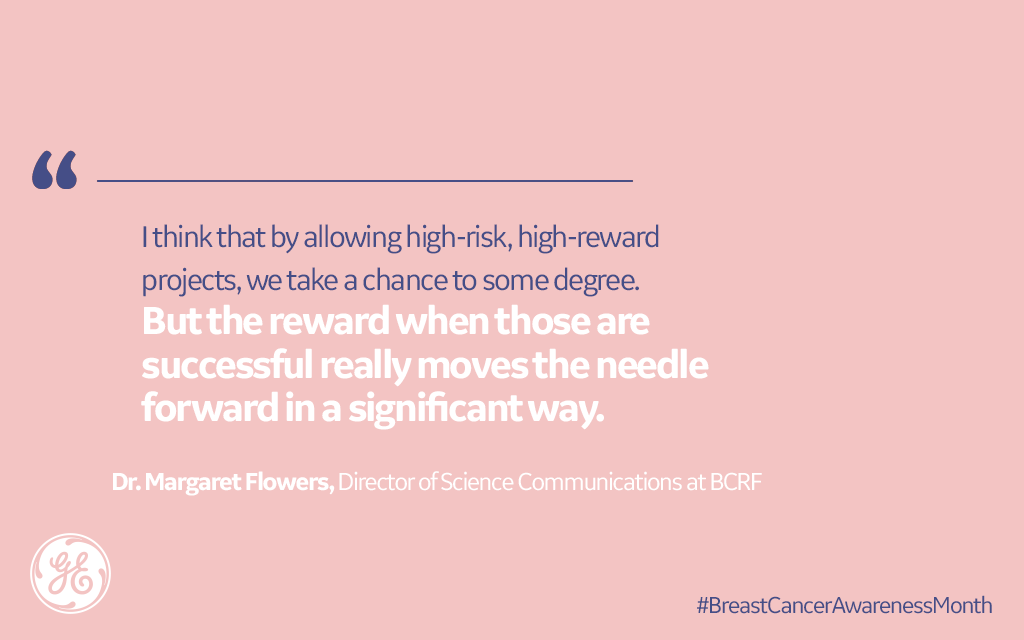 “We allow our investigators to take risks,” says Dr. Flowers. “I think that by allowing high-risk, high-reward projects, we take a chance to some degree. But the reward when those are successful really moves the needle forward in a significant way.”

One BCRF investigator identified a unique property of tumor cells that was critical to not only understanding the biology and the progression of cancer, but also in identifying treatments. But she couldn’t get funding to progress her research. An officer from BCRF heard a presentation she gave at a conference and invited her to submit a proposal. Ten years later, BCRF is still funding her breakthrough research in tumor heterogeneity.

“It is one of the leading fields in breast cancer biology right now. Without that BCRF funding, that could not have advanced,” says Dr. Flowers.

BCRF also funded an investigator who studied the gene expressions of tumors, which led to the seminal discovery of five distinct subtypes of breast cancer. “Because of his work, because of BCRF support, it’s changed how we look at breast cancer, how we treat breast cancer, and how the disease is managed at a clinical level,” says Dr. Flowers.

The organization is also dedicated to helping their investigators’ discoveries make a difference in the lives of patients. For example, BCRF investigators are in a partnership to develop a drug that could treat metastatic breast cancer. 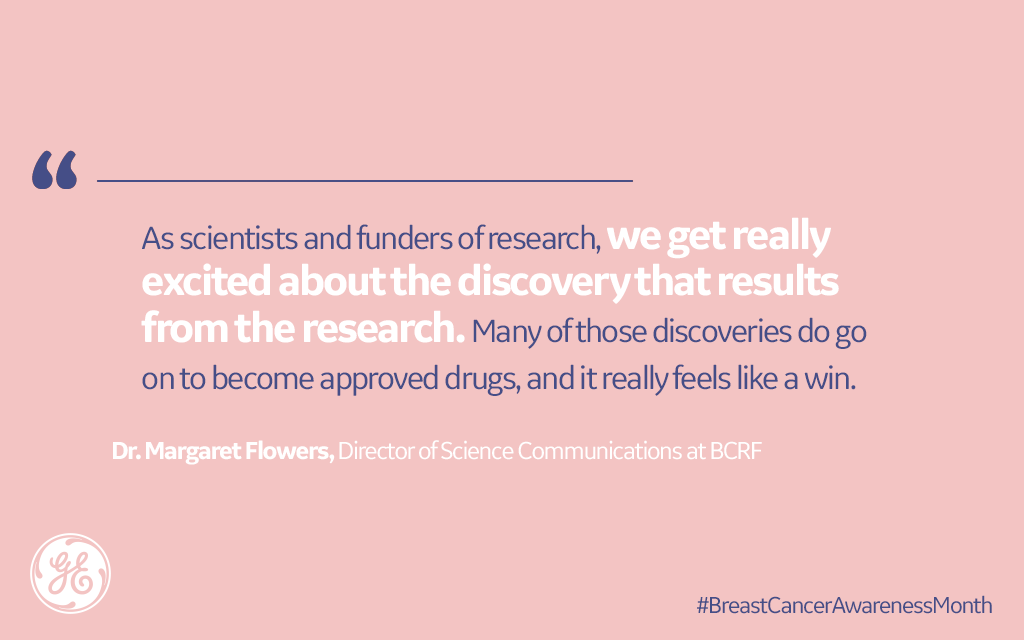 “As scientists and funders of research, we get really excited about the discovery that results from the research. Many of those discoveries do go on to become approved drugs, and it really feels like a win,” says Dr. Flowers.

In October, BCRF will honor Dr. Hedvig Hricak of Memorial Sloan Kettering Cancer Center for her seminal research in combining imaging with molecular medicine. She’s also created a program that trains radiologists and imagers from underserved countries on best practices and conducting clinical research. These trainees then have the clinical knowledge to help improve the health of residents in their home countries.

“That role of providing enrichment in different countries is huge. It takes the expertise of Dr. Hricak and extends it internationally. It elevates the level of care reaching patients,” says Biblowit.

Looking to the future

Where once we talked of a cure for breast cancer, we now speak of prevention and effective treatment or even daily management. 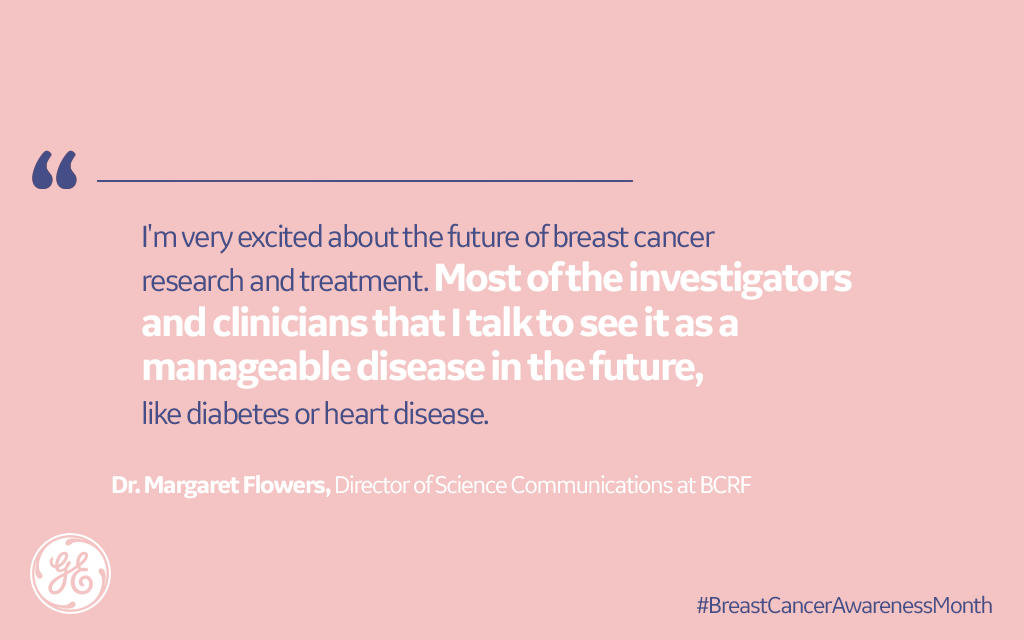 “I'm very excited about the future of breast cancer research and treatment,” says Dr. Flowers. “Most of the investigators and clinicians that I talk to see it as a manageable disease in the future, like diabetes or heart disease. You live with it, you manage it and have a normal life otherwise.”

That is even bigger than Evelyn Lauder envisioned 25 years ago, and Biblowit says Evelyn Lauder would be thrilled at the direction that research has taken – and BCRF’s role in those advances. “We all win, and the beneficiaries are the women around the world whose lives are changed.”