A little ditty’ bout Deb and Ann, two American Women, Doing the Best They Can to Save Lives

How Two Women Turned Data into Actions, Helping Doctors to Save a Patient’s Kidney

Inside a busy acute care hospital, it’s not uncommon for several hours to pass between the moment a patient is cleared for a procedure and the moment that procedure occurs.

When Tom Parker* arrived at the hospital with abdominal pain and a pre-existing kidney condition, before doctors could diagnose and treat him, they needed to know that his body could tolerate the kidney-sensitive contrast agent needed to perform a CT scan which would allow them to see inside his body. A thorough evaluation and blood work revealed Tom’s kidneys could withstand the contrast needed for the scan. However, between the time the CT was ordered, and Tom was to begin prepping for the exam, his condition and kidney function had seriously deteriorated. If administered, the contrast injection could have caused kidney failure, a discovery not made by the doctor or nurse, but flagged by artificial intelligence (AI).

AI helped detect Tom’s kidney condition, flagged it to staff, who subsequently called off the scan that could have put him into kidney failure.

Debbie Harkins and Ann Cole are part of the GE Healthcare team who developed the AI, or what they call “tiles”, that pull data from a variety of sources to feed information to GE Healthcare’s mission control-style command centers. At the heart of the command center lies a centrally located hub that houses a Wall of Analytics (WOA), displayed on a bank of monitors in the center and accessible on mobile devices. The WOA processes real-time data from multiple sources across the hospital and triggers staff to act. 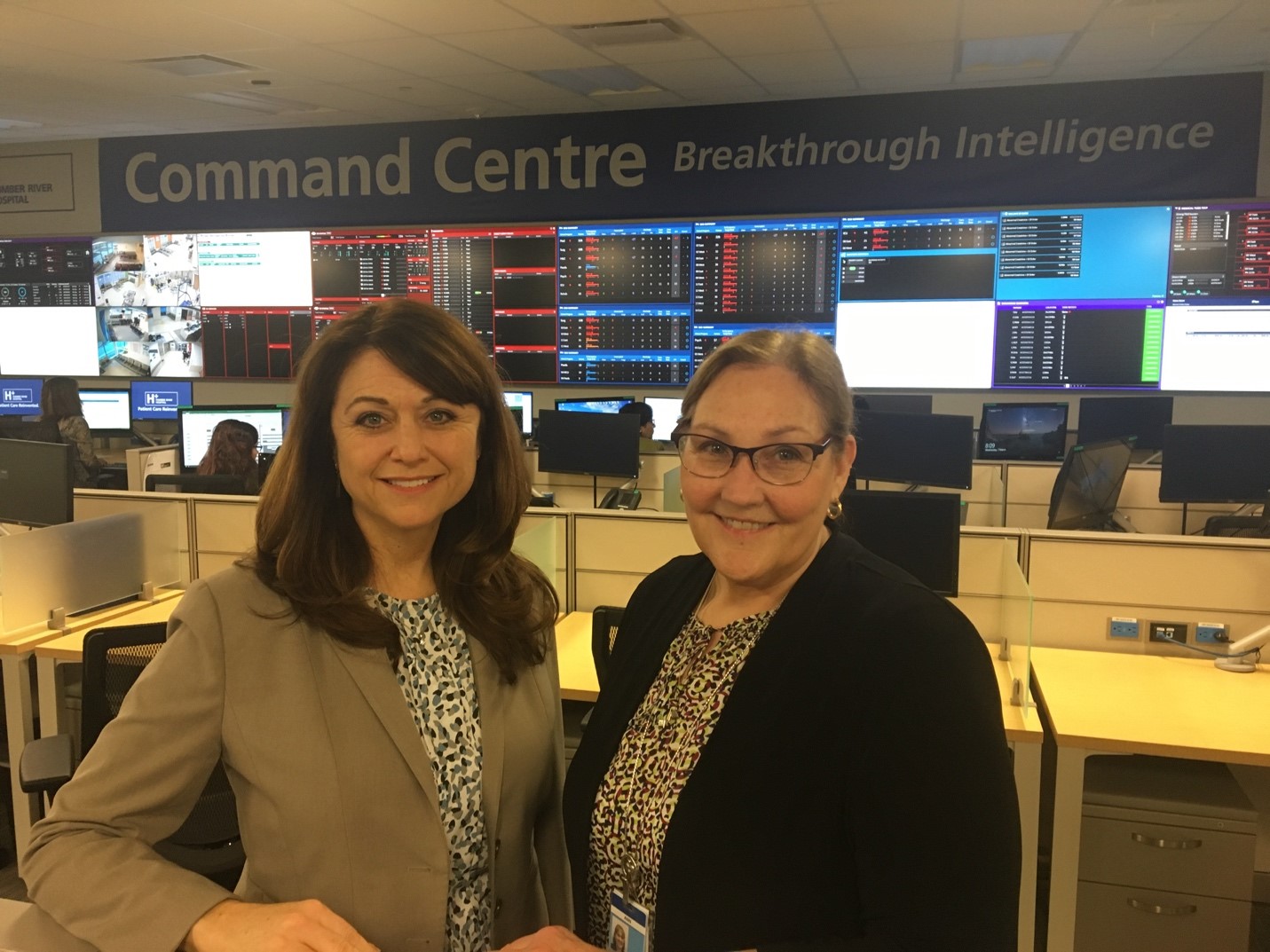 In Tom’s case, the tiles helped identify the risk while the hospital’s command center staff mitigated and responded in real-time. But for consistent outcomes to occur day to day, minute by minute, across an entire system, it takes more than a wall of monitors and responders. “All elements of the Command Center came together for the benefit of the patient in this instance,” said Debbie. “This included a pre-defined protocol for this type of situation, an empowered expediter, a data model that looks across IT systems and modules in real-time, a tile that visualizes the alert, a central dedicated hub within the hospital where such oversight takes place and immediate action occurs.”

Debbie, a practicing nurse, brings an MBA and more than 25 years of practical healthcare expertise to the GE Healthcare team, a combination of skills that helps her recommend the roles and responsibilities of the staff that works inside the Command Center along with the actions needed to come out of the data to affect change. “The reason the Command Center is successful is the analytics, but it’s enhanced when the right people are in the room working as one team. It’s critical to have people accountable for driving actions as an output of the analytics,” said Debbie.

Ann focuses on the data that comes into the Command Center, maps out the workflow for hospital employees and applies data to that workflow to create analytics. Her background in imaging, women’s health and hospital administration has given her the experience where she can bring data to life. “The experience that Debbie and I have had in hospitals working on the frontlines and being able to relay that to non-clinical people is a very important piece to this project,” said Ann. “It’s not about the equipment as much as it’s about the components within the analytics that can drive change and improve patient care in an effective manner.”

Both women agree that one of the biggest challenges when building the Command Center was data integration. “You’re trying to meld a variety of source systems into one,” said Debbie. After figuring out how to get the systems integrated, the team then turned their efforts to the people. “Data is data; it doesn’t lie. What was hard was to get people to look at the data in a different way,” commented Ann. “Change management is a big focus for the team when collaborating with the teams,” according to Debbie.

“I’ve been in the [healthcare] field for 40 years,” comments Ann. “When I think about caring for patients, I think about the triad of health: quality, access, and cost. I’m always thinking of health as a product of an individual. ‘How can I make a better product of that patient’s health?’ I can make their health product better quality and can also save money by helping hospitals operate more efficiently. We’re approaching health in such a different way and I have a passion to work to affect the health of patients.”

“I feel passionately that [the Command Center] is a game changer in Healthcare,” said Debbie. “We can now have transparency across organizations so we can make really good decisions. In the future, this can allow us to be proactive rather than reactive. It’s really exciting.”

*Tom Parker’s name was changed to protect the identity of the patient.